Lunch together, 2A singles' title match, then back to being friends

Edina’s Nicole Copeland successfully defended her Class 2A championship with a victory over teammate and close friend Andrea Jansson. 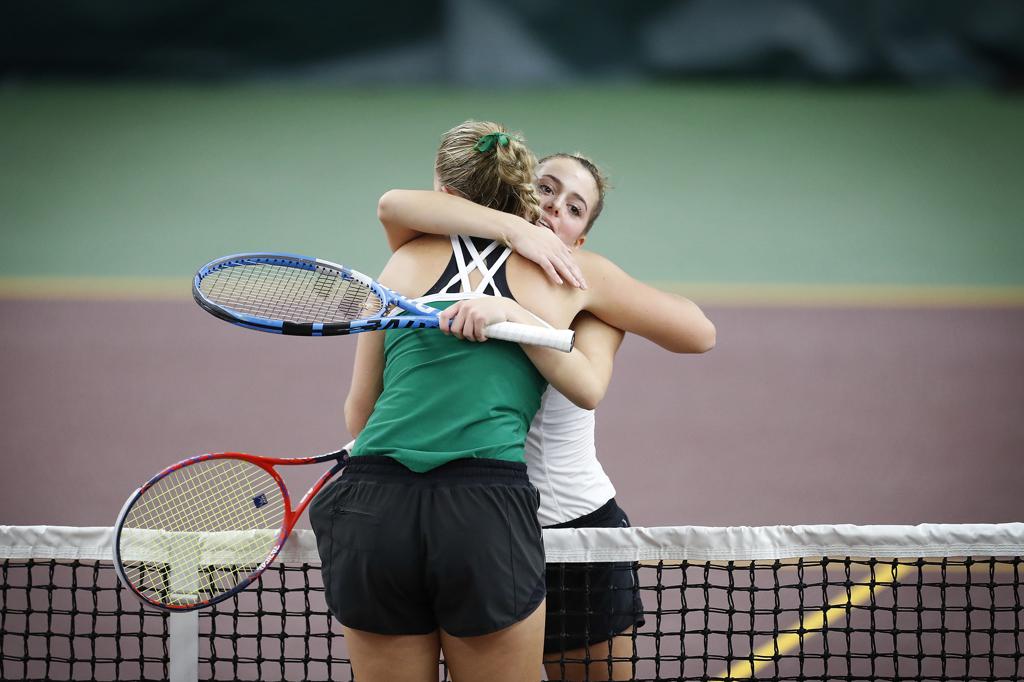 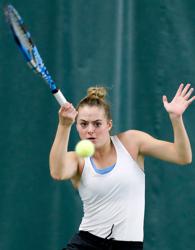 Nicole Copeland returned a volley in the championship match.

A half-hour before their championship match on Friday, Class 2A singles finalists Nicole Copeland and Andrea Jansson were hanging out together, having just had lunch, talking and smiling and enjoying each other’s company.

Friends and teammates, soon to be foes.

Setting aside that friendship proved difficult, however. The Edina teammates battled inconsistency, largely stemming from mutual affection, before Copeland, the defending state champion, took control and pulled out a 6-1, 6-4 victory at Baseline Tennis Center at the University of Minnesota.

“We’re such good friends,” Copeland said. “Before the match, we had lunch and we were having normal conversations. I flipped the switch when I got to warmups. But then right after the match, we were back to being friends.”

The two players were so close that Edina coach Steve Paulsen didn’t dare speak to either during changeovers.

“No, we stayed away. A long way away,” Paulsen said with a laugh.

For Jansson, a senior who joined the team last year after her family’s arrival from her native Sweden, familiarity and a case of nerves, along with Copeland’s power game, proved too big a trifecta to overcome.

“There were a lot of people here,” Jansson said. “I’ve never played in front of that many before. In the beginning, I was like ‘Well, I’m not going to think about it,’ but it was hard.”

Having played each other so often in practice, there were no surprises to be had. The difference was execution as Jansson struggled to find her game in the first set.“She was putting a lot of pressure on me and I was missing way too early,” Jansson said. “And she doesn’t miss.” 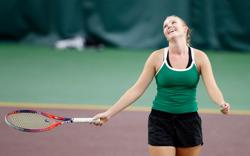 Andrea Jansson of Edina reacts after a missed play.

Jansson rallied in the second set, winning three consecutive games to cut the deficit to 5-4, but Copeland was able to close out the match. A small fist pump and a hug for Jansson sufficed for celebration.

Copeland became the seventh player in team history to win consecutive titles. This one, she said, was more difficult.

“There was a lot more pressure on me this year,” Copeland said. “I had a target on my back. It was more stressful. Not when I was on the court, but when I went to bed, I’d be thinking ‘Okay, this is the finals. This is where it matters.’ ”

When the match was over and the stress had dissipated and the finalists had shared a high five, Copeland compared the two titles. She found not much they’re not much different.

“It’s kind of the same feeling as last year,” she said. “It hasn’t really sunk it, but it feels really good.”

In the doubles final, Hopkins seniors Rachel Kelly and Maddie Suk fought back from a first-set loss to defeat Mounds View sisters Taylor and Paige Trondson 6-7, 6-0, 6-1.