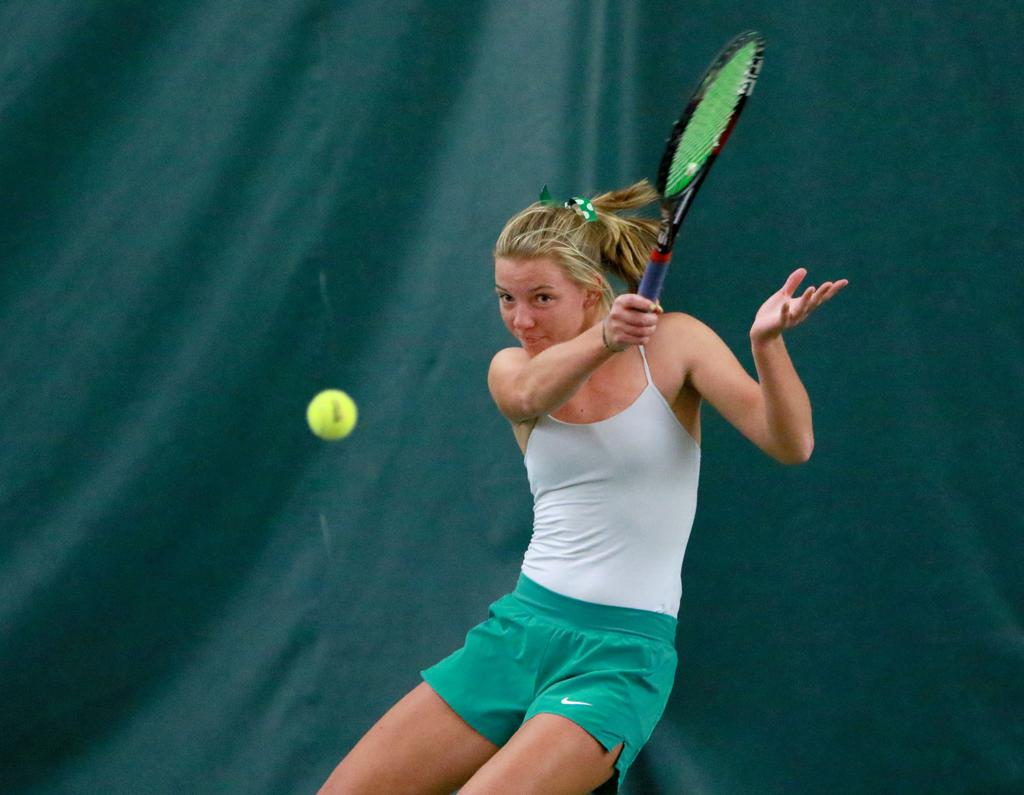 At the start of the season, perhaps the least popular person on the Mounds View girls’ tennis team was senior captain Taylor Trondson.

Entering her sixth season, Trondson realized that something was missing. “I was in the state tournament my first two years,” she said. “I missed coming here.”

So Trondson instilled a conditioning program the likes of which the Mustangs hadn’t experienced before.

The hard work generated some grumbling, but it paid dividends Tuesday as Mounds View cruised past Eagan 5-2 in the Class 2A quarterfinals of the girls’ tennis state tournament.

After losing all but three of its players from 2016, Mounds View spent 2017 learning the ins and out of high school tennis. That team had its share of fun, but Trondson believed that this season it was time to get serious.

It wasn’t easy. The jump rope drills were a chore, as were repeated sprints. Endless foot-ladder drills brought groans.

“Every single day, people yelled at Taylor,” Paige Trondson, Taylor’s younger sister, said with a laugh. “I knew she was trying to help us even though I was dying. But sometimes I was in the middle of people who were complaining, so I went back and forth.”

“It was tough,” said senior Sarah Tang, who teamed with the younger Trondson at No. 1 doubles and gave Mounds View its decisive fourth points with a 6-3, 6-3 victory. “It’s really paid off. We all have a lot more endurance than we had before. I’m definitely sprinting faster than I was last year.”

Now that Mounds View is among the last four teams vying for the Class 2A team title, Taylor Trondson’s tough drills are seen more favorably.

“I’ve been on the team for two years and I’d never been to state before,” Paige said. “It’s a huge thing.”

Said Tang, “It’s special because I’m a senior. I’ve never been in the state tournament.”

“One of them was getting here,” Taylor Trondson said, referring to her goals for the Mustangs. “We’re not supposed to be here, so this is really cool.”

Who knew being a No. 1 seed could be a disadvantage?

Defending champion Edina occupied its customary spot atop the Class 2A bracket and the favorable quarterfinal matchup it brought. The Hornets took advantage, sweeping Lake Conference rival Wayzata 7-0 to advance to the semifinals on Wednesday.

The disadvantage? It’s the third consecutive season that Edina played the 8 a.m. match.

Knowing she had an early court time ahead of her, Copeland didn’t get much sleep the night before. “I didn’t get to bed until midnight,” she said. “And I’ve been up since 5.”

Not that it mattered. The defending Class 2A singles champion cruised past Wayzata’s Miriam Shteyman 6-1, 6-1 at No. 1 singles.

It won’t get easier for Copeland, at least not for a while. Edina faces Mounds View at 8 a.m. Wednesday in a semifinal. Then she has an 8 a.m. match on Thursday in the first round of the singles tournament.

She’s not worried, however.

In the other Class 2A quarterfinals, Minnetonka built on its 2017 state tournament appearance to beat Elk River 5-2. “We’re deeper and stronger and way better than we were last year,” said freshman Annika Elvestrom, who played No. 1 singles for the No. 2-seeded Skippers.

St. James, a 5-2 winner over East Grand Forks on Tuesday, will play Litchfield in the first Class 1A semifinal on Wednesday. Litchfield defeated Osakis 7-0. The other semifinal will pit Rochester Lourdes, a 5-2 victor over Jordan, against three-time defending champion Blake, which defeated Virginia 6-1.