Erik Williams delivered a vital point at No. 4 singles in the quarterfinals victory. 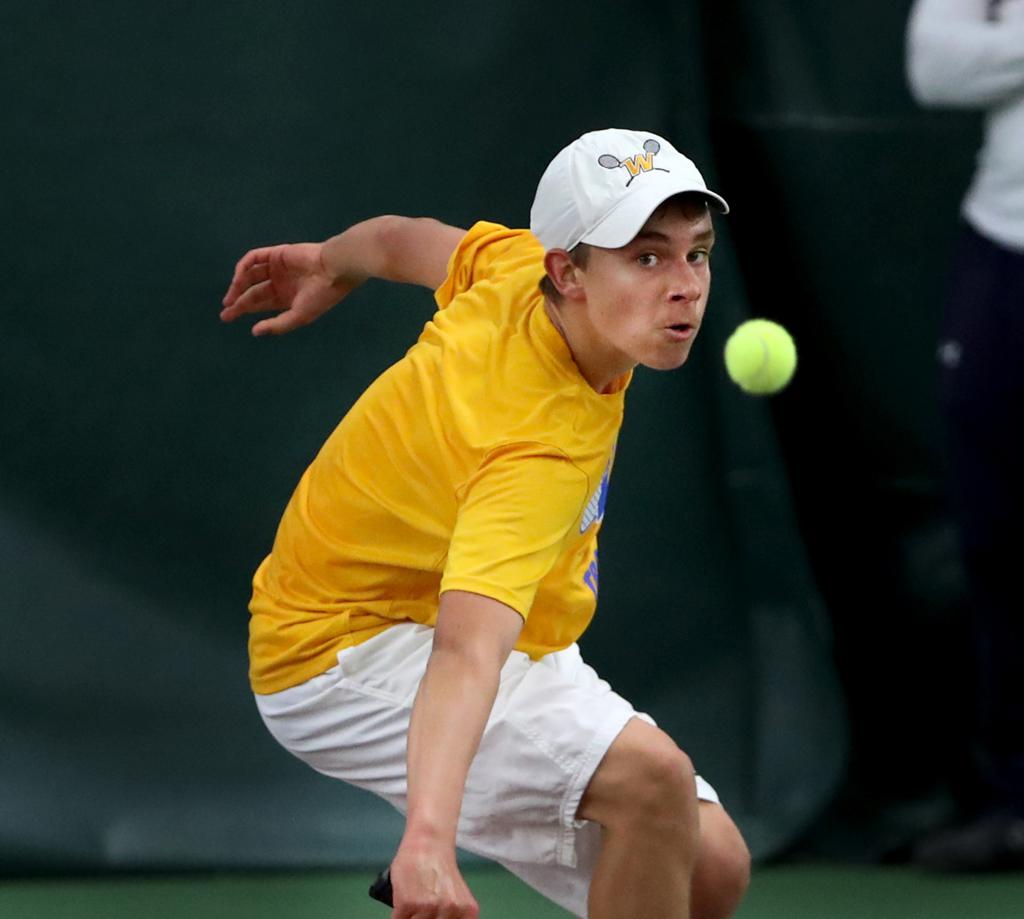 When it came to close matches, Wayzata spent much of the season looking for a single point. Or, more specifically, a singles point.

The doubles-heavy Trojans went into the Class 2A boys’ tennis team tournament Tuesday as the No. 5 seed, the byproduct of a four-loss regular season, all four by one point.

The Trojans found the point they were looking for, defeating No. 4-seeded Orono 4-3 in the quarterfinals at Baseline Tennis Center at the University of Minnesota. They swept the doubles, as expected, and emerged with a victory on senior Erik Williams’ 7-5, 2-6, 7-6 nail-biter over Matias Maule at No. 4 singles, after losing to the Spartans by the same score in April.

“That’s been our key this season: Can we get a singles point?” Wayzata coach Jeff Prondzinski said. “Erik lost to Matias before, so this is good redemption for him.”

Williams was a captain and all-tournament selection for Wayzata’s Class 2A champion boys’ soccer team. Nothing tops winning a state championship, Williams said, but providing the deciding point in the state tournament was a close second.

“Throughout the whole match, I was thinking ‘If I can win this for my team and we advance to the next round, it would be the best feeling in the world,’ ” Williams said. “This is definitely the second-best moment in my sports career.”

The Trojans will play in the semifinals Wednesday against top-seeded Blake, which won the 2017 Class 1A title but faces significantly different circumstances this time.

Playing in Class 2A this season means a change in state tournament venue from Reed-Sweatt Tennis Center, where the 1A tournament is held, and a different atmosphere and level of competitiveness.

“It’s definitely a different environment,” said Jack Barker, the Bears’ No. 1 singles player. “It’s a lot more intense, the crowds are bigger and the cheering is louder.”

Blake’s 7-0 victory over Duluth East on Tuesday was only the second time the team had played at Baseline. The first time was less than two weeks ago, when the Bears defeated Edina in the Section 6 final. Barker said he expected that experience to pay off in the state tournament.

“That match was intense,” he said. “It was good that we kept our cool.”

Known for its low-key approach, Blake plans to ramp up the intensity for the semifinals, matching the moment to the facility.

So which site does he prefer, Baseline or Reed-Sweatt?

“I’d rather play outside,” Barker said with political aplomb. “Tennis is an outdoor sport.”

Mounds View spent the first half of the season in the lower half of the state rankings. The Mustangs jumped to No. 1 in Class 2A in early May after winning the Edina Invitational, which included a victory over Blake. The Bears defeated Mounds View 5-2 in the final match of the regular season, but that loss did nothing to sap the Mustangs’ optimism.

“We played to win,” coach Scott Sundstrom said. “Even when we were ranked eighth or seventh, we didn’t really care. We just go in there and play to win. You don’t want to play not to lose. You’re just not going to win that way.”

Junior No. 1 singles player Petro Alex, whose victory at No. 4 singles as an eighth-grader clinched the team championship for Mounds View in 2015, said the loss to Blake fanned the fire for the Mustangs.

“We were No. 1 for two weeks, so we thought we were good,” he said. “That woke us up. We realized there’s a lot of season left.”