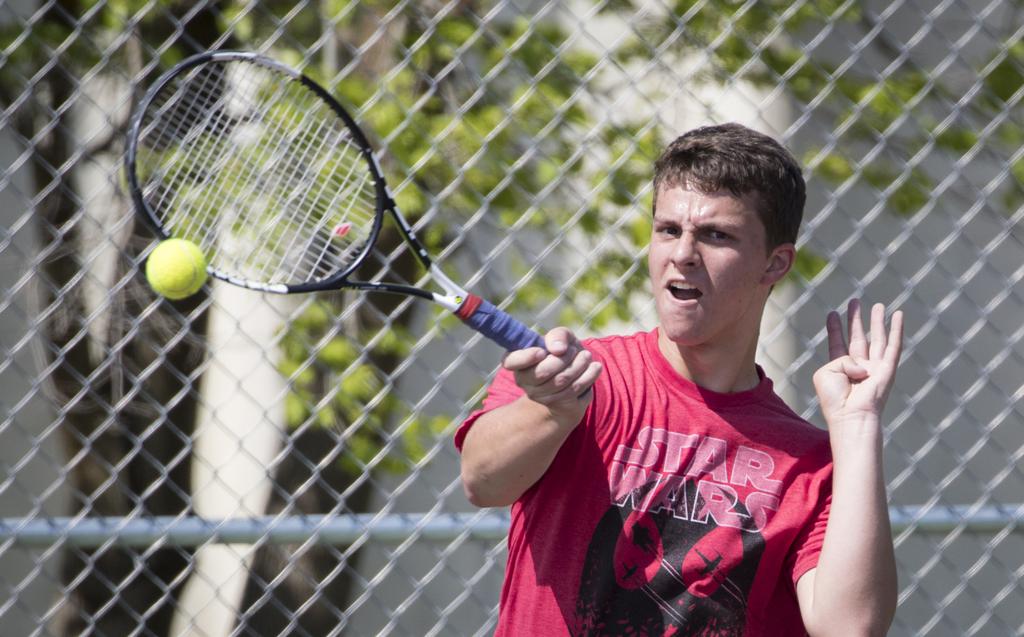 An Anoka boys’ tennis team short on experience and year-round players but loaded with personality has enjoyed a successful season.

A program record 14 consecutive victories helped the Tornadoes earn the No. 3 seed for the upcoming Class 2A, Section 7 playoffs. Not bad for a team that managed just three victories in 2015.

Despite struggling between the lines as a junior new to the sport that spring, Gavin Maloney enjoyed his teammates and expanding his social circle. So the next year, he encouraged younger brother Owen, a sophomore, to join. Owen recruited hockey buddies and fellow tennis novices Max Hayes, Ryan Kirchen, Joey Miller and Blake Perry, and they became the core of Anoka’s athletic and mentally tough team.

The Tornadoes followed coach Eric Bertram’s “play hard and have fun” edict and grew through referrals from about 16 players in 2015 to more than 50 this season. Anoka’s seniors are preparing for their final playoff run boasting a 16-3 record that is more than they dared dream as sophomores.

“I’m extremely surprised,” said Owen Maloney, who shares captain duties with fellow seniors Justin Melby and Nick Spiering. “I didn’t think I’d play that much, let alone be one of the captains.”

While a grass-roots approach to growing numbers and a blue-collar playing style make Anoka a surprise success story, Melby pointed out, “We have a solid all-around team of guys who are reasonably athletic. And if you can outwork somebody, you can usually win a match.”

Down 3-1 to rival Blaine on April 27, Anoka summoned all of its intangibles for the season’s most resounding comeback victory.

Kirchen at No. 3 singles, Hayes and Perry at No. 1 doubles, and Maloney and Miller at No. 2 doubles all won their first sets. Then they each dropped long second sets. Then the rain started, forcing Anoka back to its team bus for a 20-minute delay.

“Coach gave a pep talk,” Spiering said. “He asked each guy if they thought they could win. Everyone agreed that they could, and then they went out and won.”

Players developed their own lingo. They slam the ball and yell, “Yammer.” They proclaim, “The boys are buzzing” whenever they seize momentum, or, “We are amping,” when they are feeling it.

“They do that for each other, not to be negative toward the other team,” Bertram said. “I don’t think there is a team that has more fun. They feed off each other. And I think it can be a little intimidating to play against.”

Any shanked shot becomes a “see ya ball,” a telling example of how they avoid mounting pressure within matches. The Tornadoes won 4-3 matches five times this season.

“Everyone is so enjoyable to talk to and be around that it makes you want to push yourself during matches to be better,” Melby said.

“We get that competitive mentality from our others sports, and that gives us the will to do well as a team,” Spiering said. “Our team-centered play combined with that mentality caused us to have success this year.”