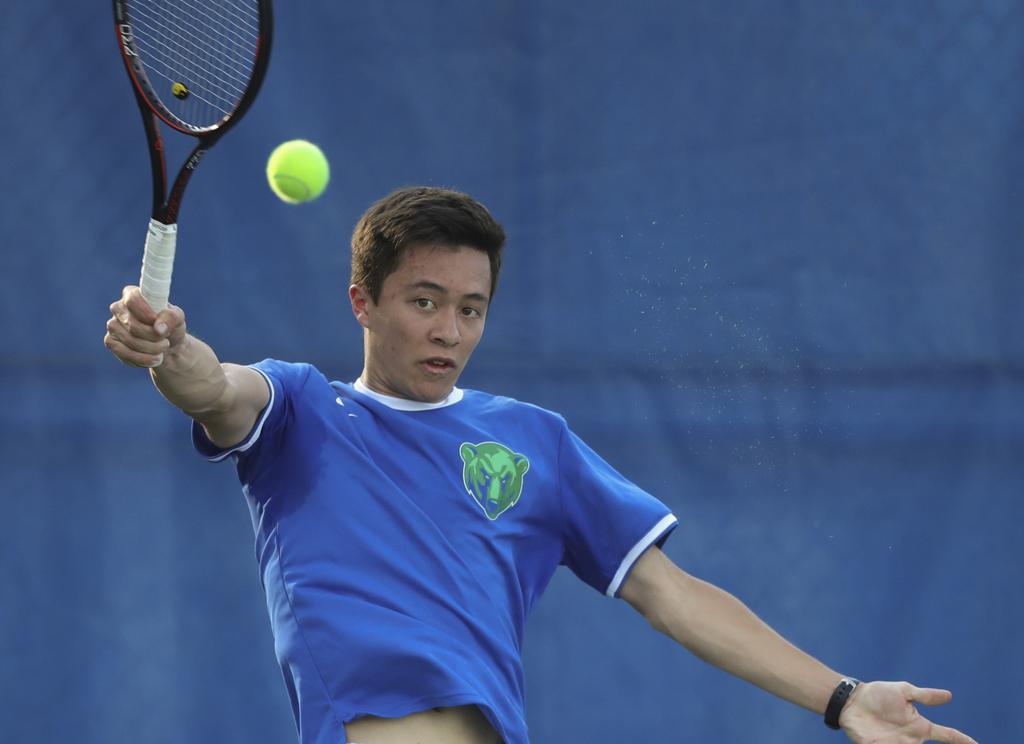 While other soon-to-graduate high school seniors have summers planned around travel and beaches and getting ready for the next stage in their lives, Jack Barker of Blake has a different goal in mind.

He plans on reading James Joyce’s “Ulysses,” a tome heralded not only as one of the greatest English novels ever published but also one of the most challenging.

Not what one would call light reading, but then Barker is, admittedly, prone to following the road not taken.

“It’s always come naturally to me to think outside the box,” he said.

Take tennis, the sport for which Barker has made his name. The 2017 Class 1A singles champion has made a smooth transition to Class 2A, chalking up spotless record and the No. 3 ranking in 2A as Blake’s No. 1 singles player. He has the requisite skills but has augmented them with so much more. A one-handed backhand, for example, practically unheard of among junior players. Drop shots, volleys, topspin lobs and slicing approaches.

While his contemporaries pound away with mechanical monotony, Barker responds with cleverness and intelligent shot-making. A thinking man’s approach. To defeat him requires being ready for anything.

For example, in a recent match against a hard-hitting top-10 opponent, Barker tried a drop shot that went a little deeper than he had hoped. His opponent raced to the net and rifled a shot to Barker’s backhand. Barker calmly delivered a one-handed backhand topspin lob that landed just inside the baseline. Point won. Message delivered.

“I’m not the biggest or most powerful player, so I try to make up for it by keeping my opponents off-balance as much as I can,” Barker reasoned. “In singles, there’s a 1,000 square feet of court space and I want to use as much as I can.”

Watching Barker play is mindful of tennis in an earlier era, when artfulness was as important as power. A young John McEnroe comes to mind, although Barker, a generation removed from McEnroe’s exploits, prefers a more current comparison.

“People compare me to Roger Federer sometimes,” he says with hesitation, trying not to sound arrogant. “My teammates sometimes use the nickname ‘Stan’, for [ATP professional] Stan Wawrinka, because of his one-handed backhand.”

Barker didn’t start out seeking to be different. In his formative tennis years, spent in Greenwich, Conn., he was a typical baseline backboard, albeit one with enviable hand-eye coordination and a desire to do more than just swing from the heels.

“When he was young, you could tell,” his father, Dan, said. “Tennis, ping-pong, he picked it up right away.”

Not until he moved to Minnesota before eighth grade did his deft physical skills and cerebral nature coalesce into a tennis philosophy. Well-known local teaching professional Glen Allsop was the first to explore the possibilities.

“He had me work on things like drop shots, lobs, angles,” Barker said. “He tends to do a little more of that than other coaches.”

None of Barker’s success would be possible without his mental acuity. He doesn’t suffer the emotional upheavals that bedevil so many tennis players. With the exception of an occasional guttural roar after an especially pleasing point, Barker’s demeanor rarely hints at what’s happening on court.

He’s so adept at suppressing emotion that people have asked if he’s capable of showing it. He laughs. “I’m just able to keep my negative emotions under control,” he said.

Said his father, “He’s mature beyond his years.”

For now, Barker is focused on winning another singles championship and trying to become the first player in state history to win titles in both classes.

Then it’s off to Yale, where he can indulge his passion for literature (William Faulkner’s “The Sound and the Fury” is a favorite) and playing Bob Dylan tunes on his acoustic guitar.

“I’m curious about the world and about people,” he said. “I try to take in as much as I can.”