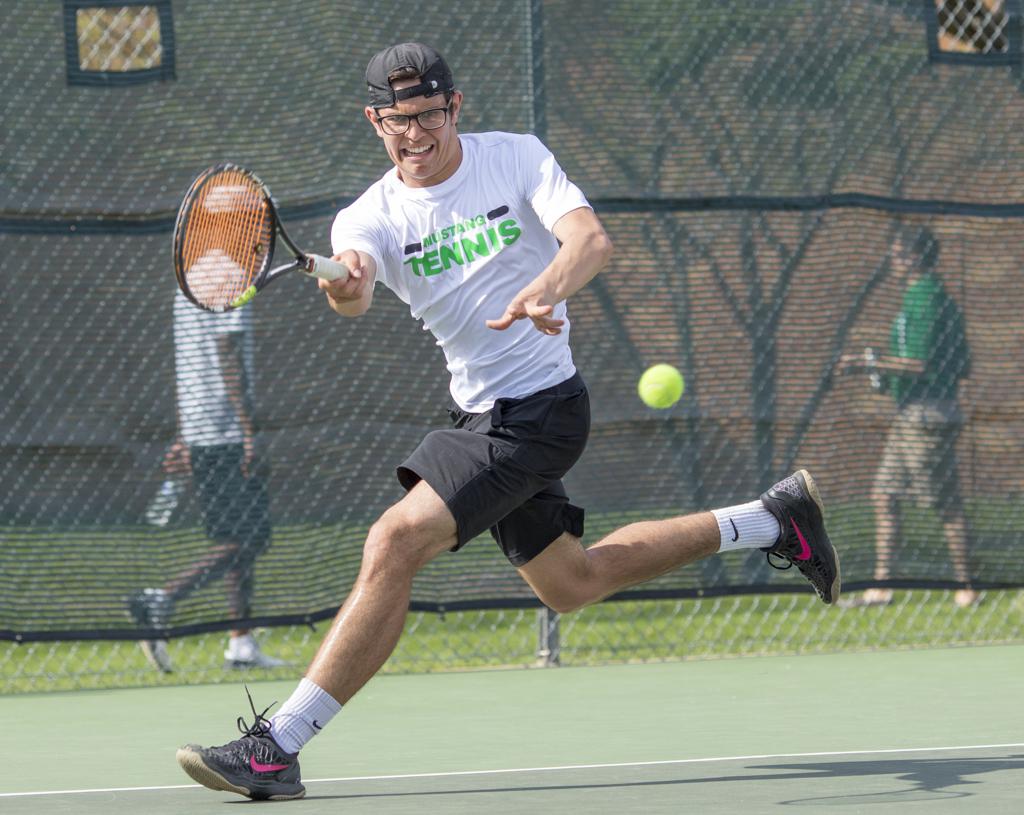 Mounds View's Petro Alex won his match at the at the Edina Tennis Tournament. [ Special to Star Tribune, photo by Matt Blewett]

After Saturday, it’s time to throw Mounds View in the mix as a team with a legitimate chance at a boys’ tennis state championship.

The No. 7, Class 2A Mustangs capped an impressive week by winning the prestigious Edina John Rowe Invitational on Saturday. They beat No. 8 Minnetonka 5-2 in the quarterfinals, upset No. 1 Blake 4-3 in the semifinals and upended host Edina 5-2 in the final.

“This give us a lot of confidence moving forward in season,” Mounds View coach Scott Sundstrom said. “This is a team that’s really gung ho. If you saw the kids jumping up and down and cheering each other on, you could tell it’s a team that really wants to perform well.”

The Mustangs’ week began on a high note with a 4-3 victory over the very-same Edina team on Monday and progressed through three comfortable victories over Suburban East Conference opponents before Saturday.

A busy week, but that’s been the case for most teams as they make up matches postponed in April because of the lingering winter. Most teams have had very little chance to practice and work on improvement. Sundstrom said that his biggest goal was for his team to play with confidence, win or lose.

“I just wanted us to play well and go out there thinking that we could win,” he said. “Sometimes you go to these things and your intimidated. We weren’t intimidated at all.”

That the Mustangs won all three matches played on the home court of their opponent was validation of Sundstrom’s words.

In the semifinals, the Mustangs used third-set tiebreakers at No. 2 and No. 3 doubles to become the first team to beat Blake this season. Against Edina, they sealed the victory with third-set tiebreaker victories by seventh-grader Hank Trondson at No. 4 singles and by Christo Alex and Michael Cao at No. 1 doubles.

“This is a game of momentum shifts,” Sundstrom said. “It’s how you deal with the momentum when you have it and how you deal with is when you lose it. Just to see the guys go out there and fight hard for every point, this is a team that can win the state tournament.”