Edina's Copeland, after shunning tennis singles, is 2A champ 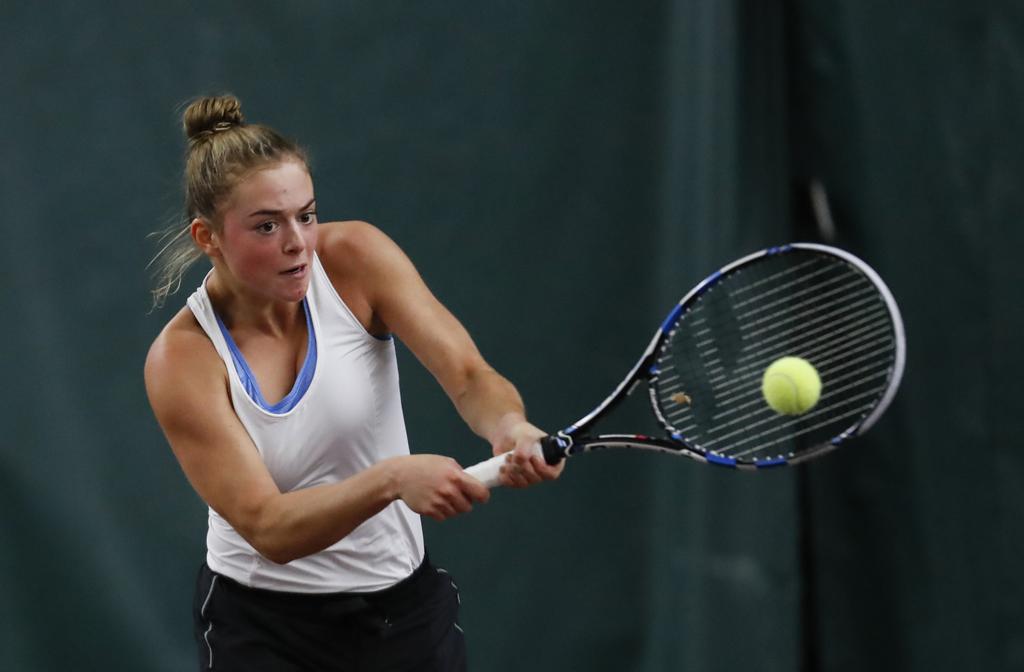 Edina's Nicole Copeland hit the ball against Elk River's Meagan Brown in the 2A championship match on Friday, October 27, 2017, in at Baseline Tennis Center at the University of Minnesota in Minneapolis, Minn. Copeland won 6-3, 6-3. ] RENEE JONES SCHNEID

As an eighth-grader, Nicole Copeland wanted nothing to do with singles tennis. Doubles was her preferred domain and she avoided singles whenever possible.

“We kind of had to force her to play singles,” Edina coach Steve Paulsen recalled. “We saw last year that she was one of our best singles players.”

Soon after, Copeland recognized the same thing. “I set a lot of goals and realized what I wanted to become,” she said. “That really transferred me over to singles.”

Going into the season, Copeland’s potential was obvious to those close to her, but few others saw her rise coming. When Brown and her coach, Randy Ronning, sat down before the season to map out a plan to the state championship, they never considered Copeland.

“We thought it would be [Minnetonka’s] Bella Lambert and [Edina’s] Sophie Reddy. If she could beat those two, she could win it.” Ronning said. “When Bella didn’t come out [for tennis] this year, all the focus was to beat Reddy. Copeland came on as a surprise.”

Once she decided singles was worth pursuing, Copeland threw herself into preparation. She spent the spring and summer playing in national tournaments and concluded that her future was as a soloist.

“It was really cool and something I wanted to do,” she said. “That’s what made me focus more.”

Her hard work earned her the No. 1 ranking in the USTA Northern Region’s Junior Girls’ 16-under category by July. Less than four months later, she was a Minnesota State High School League champion.

“I’m thrilled,” she said. “I worked so hard for this and to realize that it’s actually possible, it’s awesome.”

Brown, a hard-hitting counter-puncher, became the first Elk River player to reach the finals when she defeated Reddy 6-4, 4-6, 6-3 in the semifinals. But the ultra-consistent Copeland proved too great a challenge, repeatedly moving Brown around with powerful groundstrokes and returns that came back with pace and depth.

“They had some great rallies,” Ronning said. “Just pounding the ball all over the court. In all the years I’ve been here, I’ve never seen two harder hitters.”

Copeland had defeated Brown early August, in Elk River’s first match of the season. Brown finished the year 42-2, her only losses to Copeland.

Prior Lake’s Taylor Jackson and Charlotte Bowles defeated Princeton’s Kelsey Dorr and Reilee Schepper 6-2, 6-2 to win the doubles championship. It’s the second consecutive doubles title for Jackson, who teamed with Savannah Crowell to win it in 2016.