The Hornets were the best team in Class 2A all year, and they were hungry in a way they hadn’t been in past years. 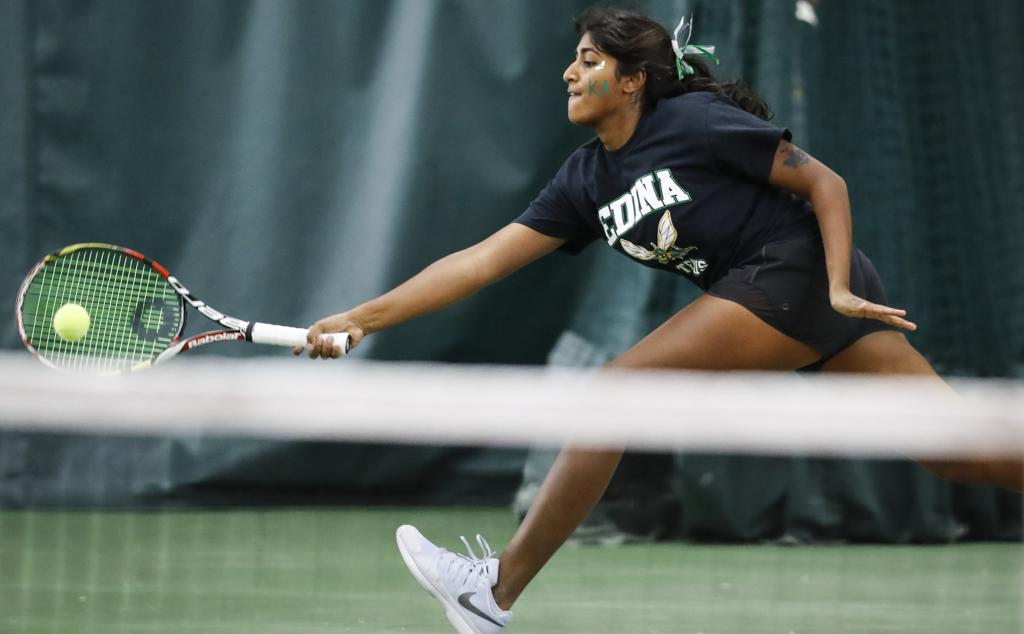 Edina's Sophia Reddy hit the ball in a first singles match against Katelyn Tarrolly during the 2A team tennis girls championship between Edina and St. Cloud Tech at the Baseline Tennis Center at the University of Minnesota on Wednesday, October 25, 2017,

Margaux Boyer had avoided tears. But as Edina’s No. 3 singles player talked about the Hornets’ 7-0 victory over St. Cloud Tech to regain the Class 2A team championship — after their 19-year streak of titles came to an end in 2016 — they began to flow.

“Last year was really sad,” said the senior, pausing to compose herself. “It still carries with me to this day. I’ve never really cried, but losing last year makes it more reflective. This year, it means so much more.”

Winning 19 consecutive championships came with its own set of challenges. The pressure to carry on the streak. The difficulty of staying motivated. Good problems to have, to be sure, but problems nonetheless.

The Hornets had no such problems this season. Not only were they the best team in Class 2A all year, they were hungry in a way they hadn’t been in past years.

“I do think we took it for granted,” said senior Sophia Reddy, the Hornets’ No. 1 singles player. “Some years, we won 7-0 in the finals because we were so deep and so strong. But after losing it last year, it means so much more. We’re not taking it for granted anymore.”

The added determination showed through the moment Edina took the court for the semifinals Wednesday morning, overwhelming Wayzata with a wave of momentum. The Hornets’ four singles players lost just eight total games in the 7-0 rout.

“They came out so strong, I took a picture of the scoreboards,” Edina coach Steve Paulsen said. “We talked about matching Wayzata’s energy and we did.”

They did the same to St. Cloud Tech in the final. Tech was making its first championship match appearance since 2000, after a 4-3 comeback victory over 2016 champion Mahtomedi in the semifinals.

Whatever momentum the Tigers had going into the final dissipated quickly. Boyer closed out her match first, followed in quick succession by the Nos. 1 and 2 doubles teams. When Reddy put the final touches on a 6-0, 6-2 victory to clinch the deciding fourth point, a cathartic roar went up from the Edina fans as they let go of a year’s worth of bad feelings.

“I tell the kids, ‘As successful as we’ve been, don’t take this for granted,’” Paulsen said. “From the semifinals on, our girls seemed to play their best tennis.”

Paulsen is a low-key coach whose approach is to let the team take ownership of, and responsibility for, itself. But even he admitted to a greater level of satisfaction.

“It means a lot to me, too,” he said. “To come back the way we did and strive for a common goal. To see the kids put in the effort and the time, it’s paid off.”