Marci Weiner prepared the Trojans for a postseason run by lining up the most difficult schedule she could. 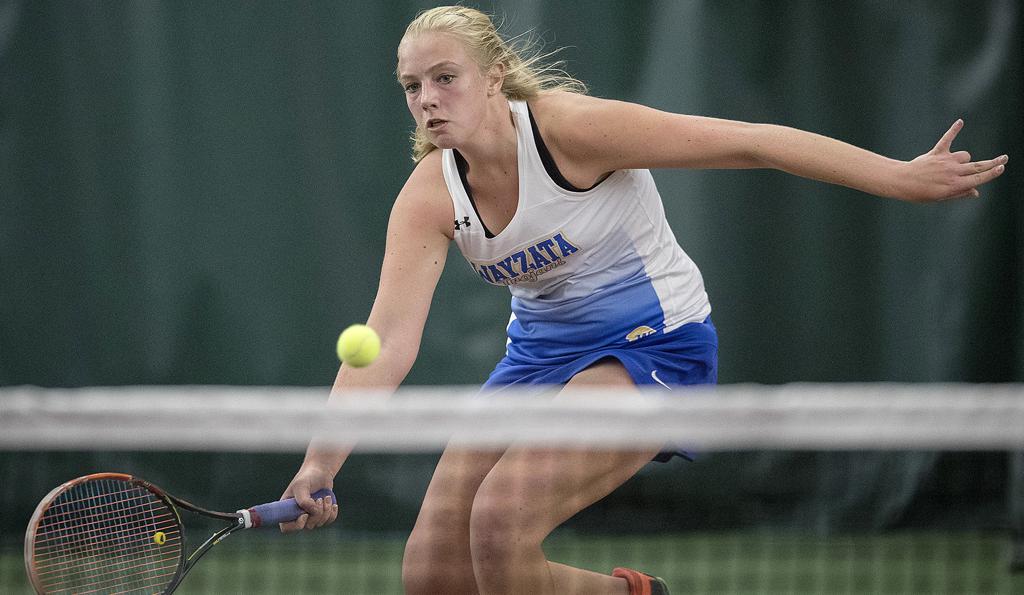 There were times this season when Wayzata girls’ tennis coach Marci Weiner wondered if she was doing the right thing.

With a team loaded with seniors, Weiner saw an opportunity for the Trojans’ first state tournament berth since 2004. So she sought to prepare the team by lining up the most difficult schedule she could.

That experience paid dividends Tuesday as the Trojans, the No. 5 seed in the Class 2A tournament field, fought off repeated second-set challenges from No. 4-seeded Rochester Mayo to beat the Spartans 6-1 and advance to Wednesday’s semifinals.

“Halfway through the season, I thought, ‘Oh my gosh, why did I do this?’ ” Weiner said. “Now, we’re out here playing our best because we’ve had a chance all season to see the top competition.”

The Trojans didn’t go through the season unscathed. Scattered among their many successes were losses to Mahtomedi, Prior Lake, St. Cloud Tech, Edina and Hopkins.

Wayzata started well in Tuesday’s match at the University of Minnesota Baseline Tennis Center, winning the first set in all seven matches. Mayo rallied in the second sets, however, taking leads in five of them before Wayzata, with its match-toughened background, battled back.

“We had some close wins and some close losses,” said senior Sam Stephenson, who plays No. 1 singles for the Trojans. “But it’s all experience. Being in positions like that, it makes it much easier to come out here and play strong.”

It wasn’t until Andrea Jansson and her family landed in Edina that reality sunk in for her.

Before that, the notion of moving from their home in Gothenburg, Sweden, to Minnesota — the result of her father’s job promotion — was difficult to grasp.

“I didn’t really get it until we actually moved here,” Jansson said. “Everything here was like in a high school movie: the buses, the team, the school.”

The junior won at No. 4 singles for the Hornets in a 6-1 team victory over Eagan in the Class 2A quarterfinals. It’s Jansson’s first experience with team tennis, which isn’t played as such in Sweden. It didn’t take her long to come to appreciate playing for group, rather than individual, success.

“It’s nice to play with girls that you can hang out with outside of the court,” Jansson said. “It’s fun to have people cheering. I’ve never had that before.”

Jansson knows the history of the Edina program, particularly the loss in the 2016 Class 2A semifinals that ended the Hornets’ streak of 19 state championships in a row. She’s determined to help them regain their status atop the Class 2A tennis world.

“I’ve heard a lot about the loss last year,” she said. “We have 23, 24 girls who are amazing to play with and practice with. Everyone’s really excited to win and, of course, I want to help. It’s fun to win.”

As the defending champion, Mahtomedi spent the season as the foe everyone wanted to beat. The Zephyrs defeated Elk River 4-3 to advance to the semifinals. At this point of the season, a victory, regardless of how it’s accomplished, is appreciated.

Senior Grace Riermann lost at No. 1 singles to Elk River’s Meagan Brown 6-4, 6-0 but acknowledged that the team victory was more important than individual success.

“We’ve had a little bit of a target on our backs, definitely, but we came into this wanting to play our best and have some confidence,” Riermann said. “No matter what the score was, we pulled it out and we’re happy we’re advancing.”

The Zephyrs will face St. Cloud Tech in the semifinals. The Tigers got victories from the Tarrolly sisters, Katelyn and Ashley, at No. 1 and 2 singles en route to a 4-3 victory over Minnetonka.

No surprises in the Class 1A quarterfinals at Reed-Sweatt Tennis Center in Minneapolis, where Holy Family defeated Virginia 4-3 and Osakis downed Blue Earth Area 6-1 to set up one semifinal matchup. No. 1-ranked Blake blanked Litchfield 7-0 and will meet Rochester Lourdes, a 5-2 winner over Roseau, in the other.