Sophia Reddy, twice a 2A runner-up for Edina, will try to clear that final hurdle. 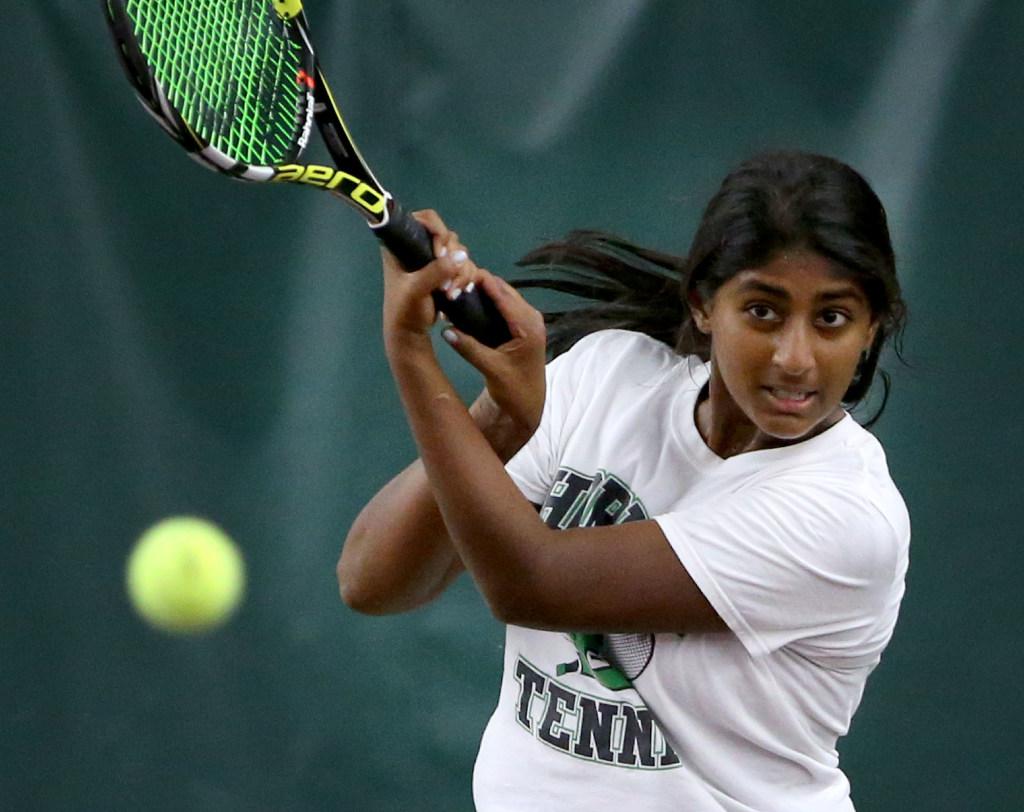 Edina's Sophia Reddy, shown here returning a shot in match with Delano's Ginger Valentine in the Class 2A state tournament in 2016, has one more shot at winning the individual title this week. Photo: DAVID JOLES * joles@startribune.com

Six seasons ago, things seemed perfectly aligned for Edina’s Sophia Reddy to take her place among her team’s all-time greats.

Then a seventh-grader, Reddy advanced to the Class 2A singles championship match at the 2012 girls’ tennis state tournament, falling to eventual champion Summer Brills of Mounds View.

It seemed just a matter of time before Reddy would add her name to the list of state champions, perhaps more than once.

Now a senior, Reddy enters the state tournament — the team competition is Tuesday and Wednesday, individuals Thursday and Friday — with more than a half-decade of tournament experience, a recent commitment to Brown University and the No. 2 seed in the 2A singles field.

And still no title.

“I’ve gotten so close so many times,” Reddy said. “I do wish I had one by now, but it’s not something I dwell on.”

Reddy has been 2A singles runner-up twice, including last year, along with a third- and a fourth-place finish. She also finished third in doubles as an eighth-grader, paired with Kelly Reger.

The thing is, tennis is Reddy’s passion. Ultra-serious and hypercompetitive and always driven to put in the extra time on the court needed to improve, she’s even baffled that she’s yet to reach that ultimate goal.

“I’m not sure why,” she said. “Something always happens, or I don’t play my best.”

The belief was that this year would be different. She rolled undefeated through the season and was ranked No. 1 in Class 2A all year. But her championship-match bugaboo showed up again in the Section 6 finals, when she lost to teammate Nicole Copeland 7-5, 6-3.

“Coley played amazing,” she said. “Hats to her. But I really wasn’t playing my game. I couldn’t close it out.”

The victory earned Copeland, a sophomore, the No. 1 seed in the tournament, with Reddy right behind. Elk River’s Meagan Brown is seeded No. 3.

Based on season-long results, Reddy still is considered a favorite to win the title. This year, she believes, she’ll finally summit that mountain.

“It’s super different this year,” she said. “In your senior year, it becomes so much more important. I’ve grown up so much, even since last year. I’m a different player.”

Class 2A: Edina, which had its 19-year streak of team state championships broken by Mahtomedi in the semifinals last year, looks poised to begin another streak. The undefeated Hornets have Reddy and Copeland, the top two singles players, and a deep lineup that includes veteran Margaux Boyer and Andrea Jansson, a talented junior whose family moved to Edina in August from Gothenburg, Sweden. Mahtomedi is back, but without one of its top players in senior Olivia Paradise, who is no longer with the team. A new singles champion is assured. The 2016 winner, Bella Lambert of Minnetonka, did not play high school tennis, focusing instead early graduation from high school to take a spot on the University of Minnesota tennis team.

Class 1A: With all due respect to the other seven teams in the field, top-ranked Blake is expected to roll to the title. The Bears have only two losses this season, both to Class 2A tournament teams, Wayzata and Edina. Singles players Lainey Axell and Arlina Shen earned the Nos. 1 and 2 seeds in the singles bracket — No. 3 is Katie Mulvey of Trinity — and the tandem of Sophie Skallerud and Abbie Nelson picked up the top seed in doubles.