The senior finally has some company at the state tourney. 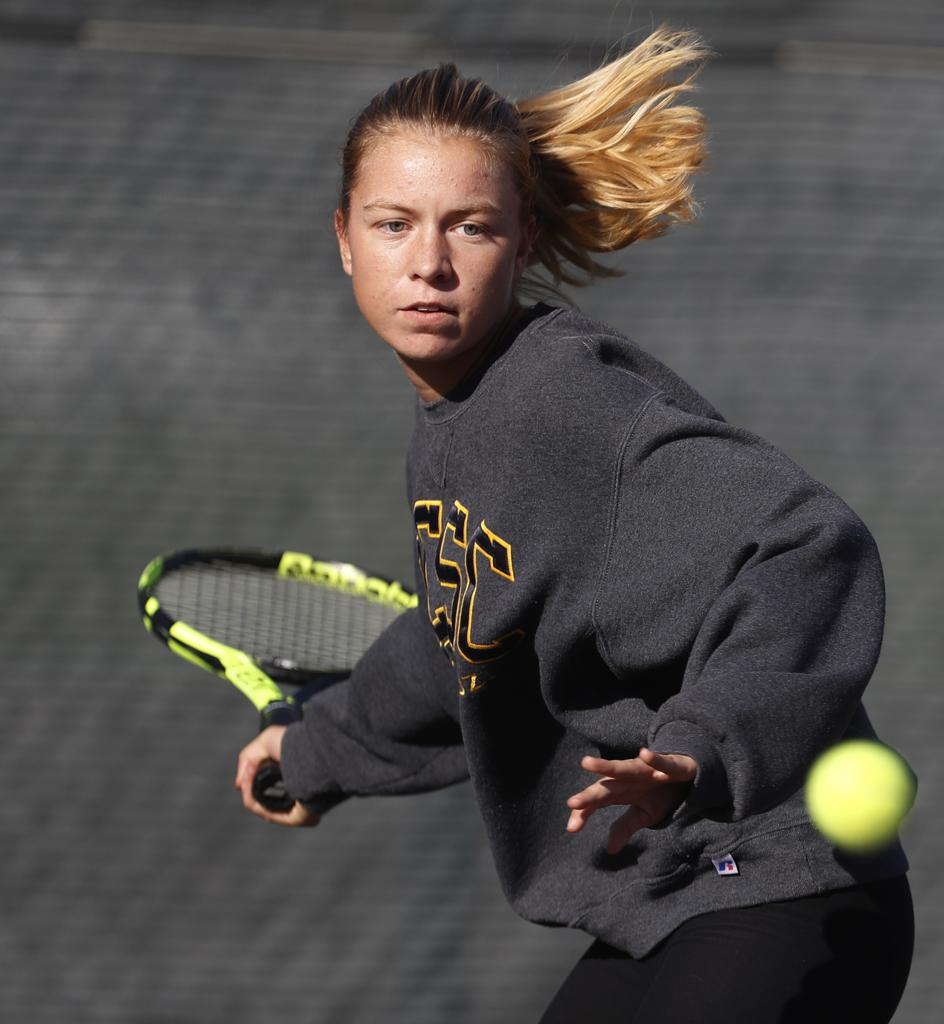 Meagan Brown is a contender for the state title.] Elk River H.S. girls' tennis team is headed to the state tournament. Richard Tsong-Taatarii/Richard.tsong-taatarii@startribune.com

When Elk River No. 1 singles player Meagan Brown won her match in the Class 2A, Section 7 team championship, she was mobbed by her teammates.

They had called it “Operation Duluth,” one of 20 items on their team code. “Operation Duluth” actually dated to 1979, when Ronning coached the St. Francis girls’ team in the same section and it defeated Duluth East in the semifinal before making state.

The Elks return to state Tuesday for the first time since their run from 2006-12, when they won two consolation championships (2007, 2008), finished second (2009) and third (2011). Unseeded this year, they’ll take on No. 2 seed Mahtomedi, the defending state champion and a team that beat the Elks 6-1 earlier this season.

“I’m just glad we finally made it as a team,” Brown said. “And I’m just excited to finally be able to go with them and play with them and not just be on my own.”

The Elks defeated Duluth East 4-3 in the section final, continuing their history of tight matches. Ronning said this was the sixth consecutive time the score was 4-3 between them.

“So it’s quite a rivalry we have,” Ronning said.

This season the Elks enter the tournament with a 27-5 record. Their losses have come against top teams: state No. 3 seed St. Cloud Tech, No. 1 seed Edina, unseeded Minnetonka and No. 2 seed Mahtomedi.

They’ve done it with only five varsity starters back from last year. Five players from the junior varsity — juniors Sophie Wetherille and Lauren Conzet, sophomores Lydia Haack and Kaitlin Tran and eighth-grader Emma Anderson — have been outstanding this season, Ronning said, especially Haack, who’s 25-4. The team’s success has been a bit of a surprise.

“In fact, one of the captains about halfway through the season commented at the end of practice: ‘Wow, I never thought we’d be this good this year,’ ” Ronning said.

The leadership starts with Brown, who is 36-1 and making her fifth consecutive trip to the state tournament as a singles player. She’s never played anything but the No. 1 spot on the team. Her 153 career varsity wins have all come at No. 1 singles, except for a couple at No. 1 doubles that she played for fun. Brown probably would have made the varsity had she played high school tennis as a seventh-grader, Ronning said.

She’s a power player with the best serve of any girls in the state tournament, her coach said. She’s aggressive, hitting a lot of winners and enjoying the game the most when she’s on the attack, which is most of the time, he said.

As an eighth-grader, she won a three-set match to start her state tournament résumé before losing in the quarterfinals. She made state unseeded her freshman year, finishing as the consolation runner-up.

Brown took third place at state as the No. 4 seed in the singles tournament each of the past two years.

“She so wants to get to the finals,” Ronning said.

Should the third-seeded Brown make it back to the semifinals, there’s potential to be matched up against Edina senior and No. 2 seed Sophia Reddy for a third straight year in the tournament. Reddy beat Brown 6-0, 7-5 in the semis last year. In 2015, they were set to play in the third-place match, but Reddy defaulted with an injury. Brown never has beaten Reddy, according to Ronning.

Brown will play Eagan junior Lauren Ferg to open singles play Thursday. Brown’s teammates have watched her at state in the past.

“It just gives them that itch to want to try and get there, too,” Ronning said. “She’s been a tremendous inspiration to our program.”