The Bears are a favorite to win the Class 1A girls' tennis title, with only four upperclassmen. 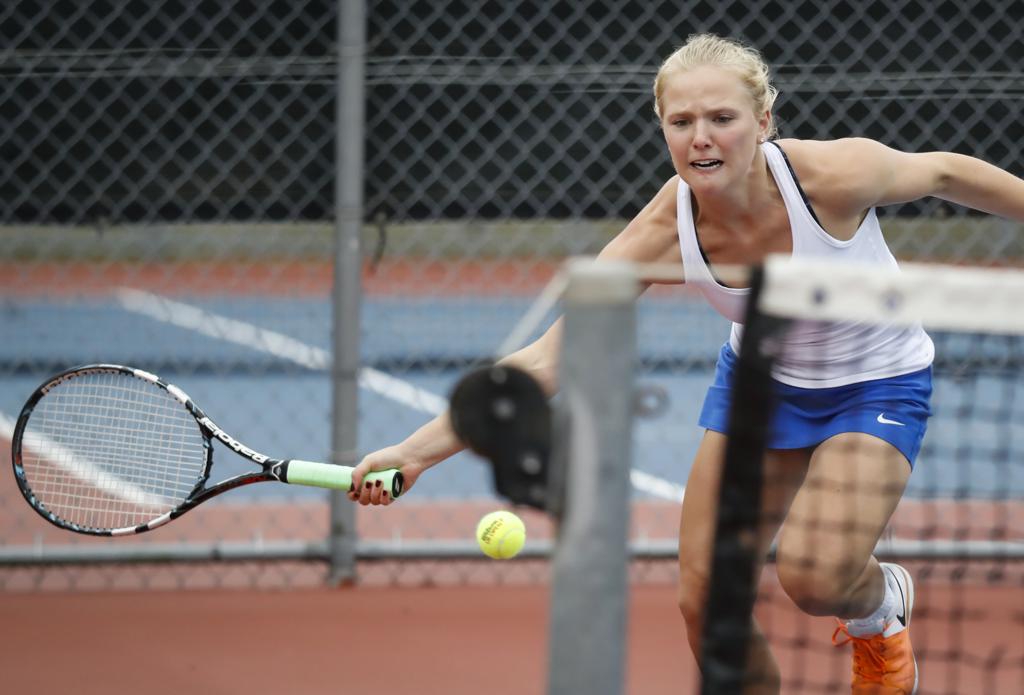 When senior Sophie Skallerud got onto the court for the Blake girls’ first tennis practice this season, something stood out to her right away. Her team is really young.

“At the beginning there were a few girls who were timid and not really knowing what to expect. Now they’ve kind of gotten into it,” Skallerud said. “They know now that they’re just as important as the older girls and captains are. So, it’s awesome to see them growing into their roles as leaders even on a team with older girls.”

The Bears have just four upperclassmen on the roster. Despite that youth, Blake is a favorite to win a third consecutive Class 1A title behind a strong doubles team and some of the state’s top singles players.

“Having last year as a building block for this year really helped a lot of the young players,” coach Mike Ach said. “It’s paying off this year.”

Lainey Axell, a senior who won the doubles championship last season while paired with Skallerud, is focused on singles this year. The Bears needed someone to fill the sizable void left by 2015 and 2016 singles champion Libby Rickeman.

Axell is one of the favorites to win the singles title this season, due in part to her athleticism.

“She’s so athletic. She moves well,” Ach said. “She creates a tough matchup for other teams just because of her athleticism.”

Axell has spent extra time cultivating that athleticism. For the past two summers, she’s worked out at Wellefast Elite Sports Training twice per week on top of her tennis practices. Bill Welle, who has worked with a number of high-profile athletes including NFL star Larry Fitzgerald, runs the Brooklyn Park-based sports performance center.

“It’s very high intensity, and it really pays off a lot on the court,” Axell said of Welle’s training. “It’s made it easier for me to get to balls, and my endurance has gone up a lot. I can stay on the court and play at my level for a longer period of time without feeling too worn out.”

If Axell doesn’t win the singles title, it could be due to one of her own teammates. Talented sophomore Arlina Shen was the singles runner-up to Rickeman for the last two seasons and appears poised for another deep run at the championship.

When Ach joined Blake’s coaching staff last year, he noticed Shen’s ability right away in an early season match against Mahtomedi. “I watched her warm up and I went, ‘Whoa, this is going to be tough.’ Not too long later, she comes off the court and it was a pretty decisive score in her favor,” Ach said. “I don’t think I’ve ever seen anyone compete as hard as she does. … She’s ruthless.”

On top of Axell and Shen, eighth-grader Bella Suk and ninth-grader Sonia Baig are some of the team’s other important singles players. But the doubles team of Skallerud and senior Abbie Nelson may be Blake’s key to extending its championship streak — the longest in the state — to a third year.

“Our singles get a lot of the publicity, but we’ve had a lot of success in our doubles,” Ach said. “Our depth in our doubles has also been bailing us out a little bit.”

Blake has won the vast majority of its matches this season but also has slipped up on occasion. The Bears lost to Wayzata early on in the year and fell to Edina last week.

The losses have offered a valuable lesson for a young team favored to repeat as champions once again. “The biggest thing standing in our way is mostly mental and just around being expected to win,” Axell said. “We just need to go out there and forget about what everybody thinks and just give our best.”