Orono, with its confidence fortified, wins Class 2A team championship in boys’ tennis

A late-season victory over Wayzata served as a launchpad. St. Paul Academy won the 1A title. 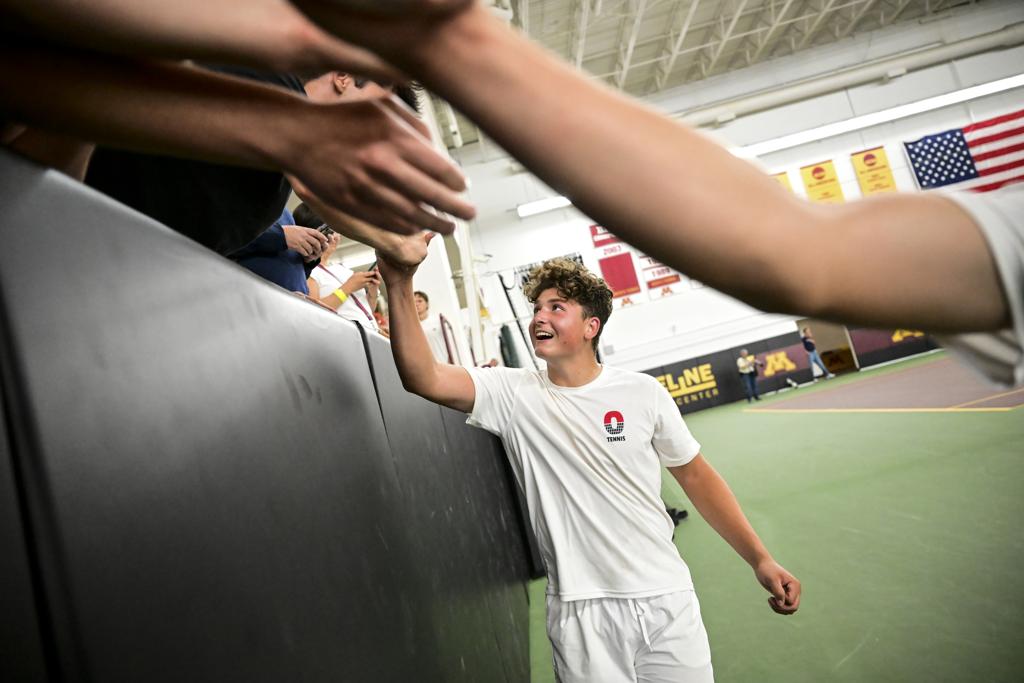 The genesis of Orono’s 4-3 victory over Edina in the Class 2A boys' tennis championship match Wednesday likely began years ago, when this group of Spartans first assembled, but it truly took root in 2021, when Orono finished third in the tournament.

“Last year, when we were celebrating third place, we were already looking to the future,” said senior captain and No. 1 singles player Matias Maule. “We were like, ‘Let’s go win it next year and prove ourselves.’ ”

Orono swept the doubles from the defending champion Hornets in Wednesday’s final at Baseline Tennis Center, getting clutch victories at the Nos. 2 and 3 positions, and clinched the victory when sophomore Hugh Perrill gutted out a 6-4, 7-5 victory at No. 3 singles over Edina’s Abhinav Maneesh, setting off a rowdy celebration among Spartans players and fans.

“I wasn’t playing my best tennis, but this offseason I worked hard in the gym on my cardio,” Perrill said. “I knew I could break him down from the legs, so I just grinded for my team.”

Perrill, a year-round tennis player, called his victory “the biggest moment of my life so far. It’s just a crazy experience.”

It is the first state championship for the Spartans, who avenged their only loss of the season by upending No. 1-ranked Wayzata in the Section 5 finals. That, said Orono coach Aaron Dvorak, spurred them to victory at the state tournament by proving the Spartans had what it took to beat the best.

“This group of guys really came together at that moment, to their credit,” Dvorak said. “It was very big for our confidence. We proved to ourselves that we could get down and then get back, fight and get better. They put in the work. It was very impressive.”

Orono (18-1) received the No. 1 seed in the tournament as a result of that victory over Wayzata. The Spartans embraced the seeding and played perhaps their best tennis of the season against Edina (18-2).

“It was something we wanted to earn,” Dvorak said. “We didn’t let it put extra pressure on us.”

Maule took a loss in his match — his opponent, Matthew Fullerton, was state singles runner-up in 2021 and is a favorite to win the title this year — but showed no signs of disappointment.

“It’s all about mind-set and doing what we needed to do as a team,” Maule said. “We had to believe, and when we beat Wayzata, it showed us that we could play with anybody and we shouldn’t fear any other team.”

After Perrill secured the victory, Maule said the feeling was like nothing he’d ever felt: “It was very surreal. You keep thinking about the moment, but once it hits you, it’s kind of like a dream. It’s a nice memory to have for the rest of my life.”

St. Paul Academy opened its season with a 5-2 victory over Breck. That proved to be a harbinger of the way the season would conclude.

The Spartans bookended their season with an identical result, downing the defending champion Mustangs 5-2 to win the Class 1A boys’ tennis team championship at Reed-Sweatt Family Tennis Center in Minneapolis.

St. Paul Academy clinched the victory early, taking an insurmountable 4-0 lead with victories at Nos. 3 and 4 singles and at Nos. 2 and 3 doubles.

St. Paul Academy finished 14-1. Breck, which coach Sion Wilkins said had vastly improved since the beginning of the season, largely because of a brutally tough schedule, ended the season 4-8.