Despite his runner-up finish in singles in 2021, the Hornets junior expects a wide-open race for the state championship 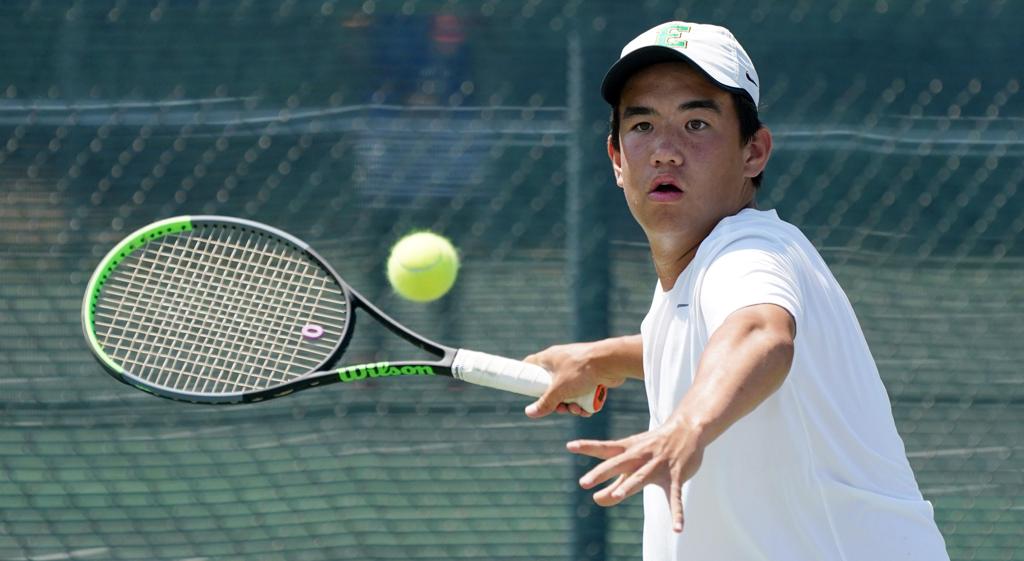 Edina’s Matthew Fullerton finished second in Class 2A last season, and the player who defeated him isn’t playing this season. Photo by ANTHONY SOUFFLE, Star Tribune

Matthew Fullerton doesn’t see things the way Edina tennis observers do. The Hornets junior, who was runner-up in Class 2A singles at the boys’ tennis state tournament in 2021, doesn’t consider himself the de facto favorite for the title this season. This is despite the fact that the player who beat him for the title, Mounds View’s Bjorn Swenson, has stepped away from high school tennis this season, his senior year.

Swenson, a two-time state singles champ, had intended to play his final season of high school tennis, hoping to join his younger brother in run at a doubles title. But he is a Michigan signee and instead has pursued a schedule of high-profile national tournaments, prepping himself for his collegiate career.

Some see Fullerton as the heir apparent. He played Swenson tough in the 2021 final, the 6-2, 6-4 final score not indicative of the competitive nature of the match. He’s the No. 2 player the state in the USTA Northern Region 18-under rankings.

Fullerton sees himself as one of a handful of local players, all of whom play each other often, with state title hopes.

“I just look at it as a new season. Anyone can break out,” he said.

Fullerton named a few players he sees with state championship capabilities, starting with teammate Nolan Ranger, a fellow junior who began playing at Edina with him in seventh grade. “He’s pretty strong. We have some intense battles in practice,” Fullerton said.

He also mentioned a pair of Wayzata players, Collin Beduhn and Jayho Hong; Orono’s Matias Maule, the 2021 third-place winner, and Eagan’s Allen Gong. “I get nervous playing all of them. It’s a challenge any time you play someone you know so well.”

“We lost some core players from last year,” he said. “It’s up to some of us who have been around and are now the core of the team to show the younger players what Edina tennis is all about.”

Because of six players with extensive varsity experience, optimism is high at Orono.

Senior Maule, headed to Washington University (St. Louis), alone gives the Spartans credibility. But the team goes into the season with confidence born of a successful winter: The school’s table tennis team, with many players who are also on the tennis team, won a state championship. Maule was its No. 1 singles player.

“We had a great team, and it’s really helped our team chemistry,” Maule said. “We experienced some high-level, high-pressure matches. We learned how to support each other when we experienced lows, and it helped motivate me to become a better leader.”

Because of the rotten early-spring weather, Orono played its first match Tuesday, sweeping Benilde-St. Margaret’s. “That was great,” Maule said. “We were saying it’s just one stop on our journey to a state championship.”

Maule and many of his teammates also played for the Orono soccer team, which won the Class 2A state title last fall.

“We’re hoping to get a third [state championship] in tennis. Some of my teammates and I would call this the Triple Crown,” Maule said.

Hope for public schools in 1A

Evan Fraser, a junior at Mounds Park Academy who lost in the 2019 Class 1A semifinals to Breck’s Clayton Haberman, is the No. 1-ranked player in Class 1A. No surprise there. The small-school classification has long been dominated by private schools. Only two times since 2000 has the singles champion come from a public school: Tony Larson of Long Prairie-Grey Eagle/Swanville won in 2000, and David Bush of Duluth Denfeld won in 2018. The last public school team to win a Class 1A title was Staples-Motley in 1991.

Things might be looking up for public schools, at least in the individual brackets. Six of the top 10 players in the Class 1A rankings hail from public schools: No. 3 Tate Reichmann, Minnewaska Area; No. 4 Max Sampson, Mora; No. 7 Jack Onkka, Thief River Falls; No. 8 Mason Woelfel, Litchfield; No. 9 Alex Draeger, Litchfield, and No. 10 Pierce Cunningham, Luverne.

It might be tougher for a public school to win a team title this year. The top four teams in the rankings are all private schools: Breck, Rochester Lourdes, Mounds Park Academy and St. Paul Academy.