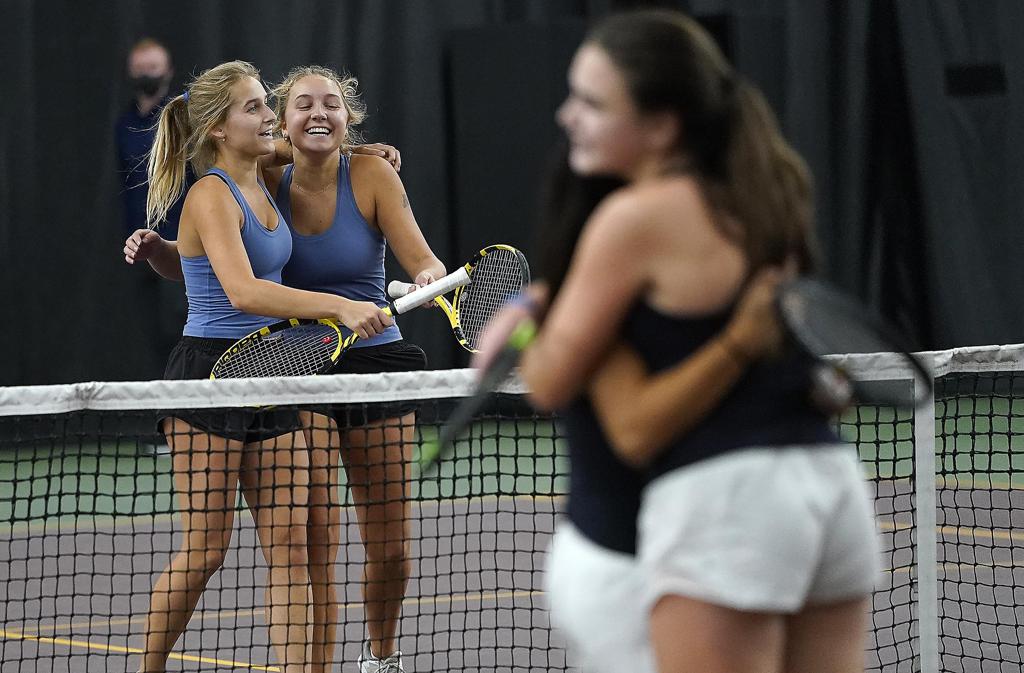 Minnetonka junior Sarah Shahbaz spent the first part of the Class 2A singles championship match feeling out her opponent, searching for weakness.

When she found it, she zeroed in and never let up.

Shahbaz defeated Maple Grove senior Zoe Adkins 7-6 (7-2), 6-0 to win the state title. Combined with 2-6, 6-3, 6-3 victory by the Elvestrom sisters, Annika and Karina, in the doubles final, the victories topped a wildly successful week for Minnetonka, which won the team title Wednesday.

The first set was a tennis version of call and response.

Shahbaz would make a tactical maneuver. Adkins would answer with a smart response. Or vice versa.

Adkins cruised to a 5-1 lead in that opening round, and she looked destined to take a one set lead.

“I felt like she gave me a few points,” Adkins said, admitting that it hadn’t been as easy as it seemed.

Shahbaz found her game when it mattered, turning the match around by taking more pace off her shots, taking control of the tempo and seizing momentum.

“In the beginning, my game wasn’t working, so I had to figure out what to do,” Shahbaz said.

What she did, Skippers coach Brent Lundell said, was locate her lob, a vital component to her game.

“To compare it to boxing, her lob is like a jab,” Lundell said. “It sets up everything else she wants to do.”

She held serve to make the score 5-2, igniting a rally in which she won 11 of the final 12 games, as well as dominate the first-set tiebreaker.

Shahbaz rode the first-set momentum to a dominant second-set victory.

“In junior tennis, you [often] see the winner of a close first set win the second set big,” Lundell said. “That’s what you saw today.”

What was also seen was a rare display of emotion from Shahbaz, who pumped her fist after the victory.

“We haven’t seen a fist pump from her all year,” Lundell noted, “until today.”

“Sarah is a really tough player to play against,” said Adkins, who lost for the first time in the last two years. “I was really trying hard in that second set, even though you can’t tell by the score. But I just couldn’t get it back.”

Annika Elvestrom had already won one state individual title, teaming with Shahbaz to win the doubles championship in 2019.

Her goal this year? Win another, this time with her younger sister.

The Elvestroms rode out a flawless first set from the Rochester Century duo of Julia Baber and Paige Sargent, falling 2-6, and rallied to take the doubles championship, back-to-back sets 6-3.

“After the first set, we started going point-by-point, not thinking too far ahead,” said Karina Elvestrom.

When it was over, the sisters — Annika is a senior, Karina a sophomore — said it was everything they hoped it would be.

“This was so much fun,” Karina said.