'Do it for Dave': Minnetonka wins emotional state title

The Skippers played all year with the memory of longtime head coach, Dave Stearns, who passed away unexpectedly in the offseason. 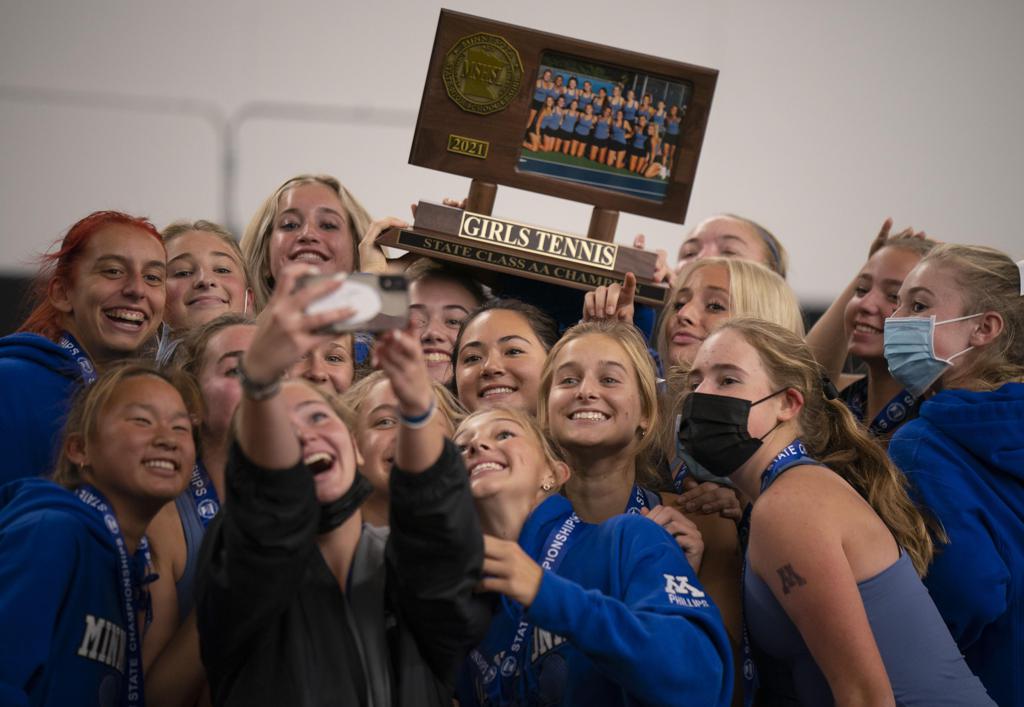 Minnetonka players took their own group selfie after the trophy presentation for their Class 2A championship Wednesday. [Jeff Wheeler, Star Tribune]

For the first time this season, the No. 1-ranked Minnetonka girls’ tennis players admitted to being nervous.

The Skippers spent the season as the unquestioned best team in girls’ tennis. Armed with talent spilling over, they finished the season with a 21-0 record in dual meets after beating Blake 6-1 on Wednesday for the Class 2A team championship.

Even the best teams, and players, get the jitters.

It’s not that a case of nerves were unwelcome. In fact, the players agreed that a few butterflies were what they hoped for.

“If you don’t have them, that’s no fun,” Elvestrom added.

The final score of the match reflected Minnetonka’s two seasons of dominance. The Skippers haven’t lost a team match since 2019, when they were defeated by Edina in the Class 2A team final. Last year, they were unofficial state champs after running the table and winning the Section 2 title.

But no state tournament was held in 2020 because of COVID-19 concerns, a fact that left Minnetonka players salivating for an official title to add to their résumés.

The Skippers chased perfection all year. They lost only seven individual matches, including the point Blake earned in the final.

“This is what we’ve been talking about all year,” said junior Sarah Shahbaz, who won 6-0, 6-0 at No. 1 singles. “It’s exciting that it finally happened.”

Blake coach Mike Ach, whose team won the 2019 Class 1A championship before the Bears moved up to Class 2A, was thrilled at what his team accomplished, despite the lopsided loss.

“Not bad for a 1A team, huh?” he joked after the match. “If you’d have told me this before this season, I would have taken it.”

If winning a state championship wasn’t enough of a motivation, Minnetonka played all year with the memory of longtime head coach, Dave Stearns, who passed away unexpectedly in the offseason.

He was replaced this year by Brent Lundell, who made a point of keeping his foot on the gas, careful to keep complacency at bay.

“This team was challenged every day in practice,” Lundell said. “We went after it every day. It’s well-deserved for those players out there.”

Stearns’ memory crept in often. By the time the state tournament rolled around, the Skippers’ mantra was “Do It For Dave.”

After the outcome had been decided, Minnetonka players debated how Stearns would have reacted to their title.

“Before each match, it was ‘Do It For Dave, Do it For Dave, especially before the finals,” said sophomore Karina Elvestrom, Annika’s younger sister, who teamed with junior Kelsey Phillips for a 6-1, 6-0 victory at No. 1 doubles.

“He probably would have been mumbling something in Italian,” Karina Elvestrom laughed, recalling Stearns' frequent reactions.

“Or something like ‘Now I’m going to go celebrate with my 1919 Root Beer,” Phillips interjected.

“He liked to celebrate our wins with desserts and he would tell us about it,” Annika Elvestrom said.

“He wanted this so bad,” Phillips said. “I’m glad we got to give it to him, even though he’s not here.”