The state quarterfinal match came down to No. 4 singles 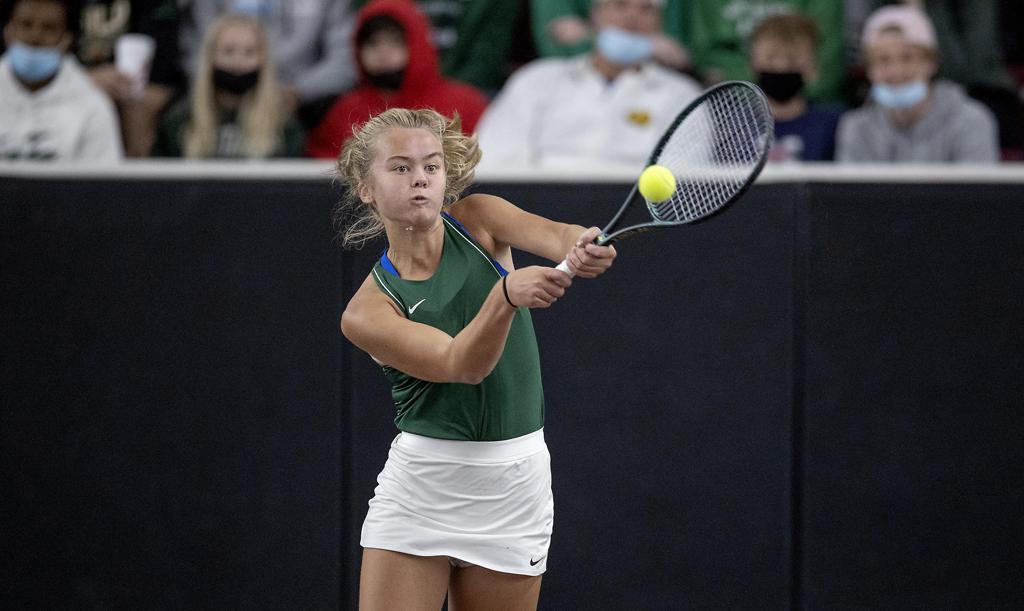 It was the type of match that often is the difference between a team moving on in the girls’ tennis state tournament or being relegated to the consolation round.

Tied 3-3, the Class 2A quarterfinal match between fourth-seeded Mounds View and No. 5 Elk River came down to No. 4 singles at Baseline Tennis Center in Minneapolis. Mounds View sophomore Isabella Myrland outlasted Elk River junior Paige Johnson 7-6, 5-7, 6-4, giving the Mustangs a 4-3 victory and sending them into Wednesday’s semifinals.

Myrland, who also plays softball, leaned on her athletic ability to rally past Johnson. Mounds View coach Scott Sundstrom confirmed that Myrland’s background played a significant role in her victory.

“She’s a multisport athlete. She’s a competitor,” Sundstrom said. “The player she was playing had a lot better stroke production than she did, but Isabella played a smarter match, especially towards the end. She was able to overcome that by athleticism and competitiveness and grit and wanting to keep herself in the match.”

The loss was just the second of the season for Elk River, who fell to 32-2.

“It was one of those matches that could have gone either way,” Elk River coach Randy Ronning said. “Paige had her chances. She led 40-15 and was up 4-3 [in the final set] and just couldn’t close it out. That’s tough.”

Mounds View (20-2) moves on to play No. 1-seeded Minnetonka, the prohibitive tournament favorite, in Wednesday’s semifinals. Minnetonka easily won its quarterfinal, beating Simley 7-0. The Skippers didn’t lose a game in six of the seven matches.

Sundstrom said he thinks his team’s underdog status could work in its favor.

Blake senior Bella Suk is a pretty fair tennis player, being ranked in the top 10 in Class 2A for most of the season.

Tuesday, she was asked to play a role for the Bears often unfamiliar to top players: Sacrificial lamb.

Suk faced off against Maple Grove senior Zoe Adkins, the state’s No. 1-ranked player, knowing a victory would be difficult. Suk struggled, losing to Adkins 6-0, 6-0, but ended up a winner anyway as Blake, in its first state tournament as a Class 2A team, got past Maple Grove 4-3 to advance to Wednesday’s semifinals.

The Bears will play Rochester Mayo, which defeated Bemidji 7-0.

“Overall, I’m very proud of the team that we were able to pull together and pull through,” said Suk, putting team needs ahead of her own. “It puts you more at ease knowing that your team was still able to win even though you weren’t able to win.”

“It’s a tough task to go against these top players, but she’s done it all year,” Blake coach Mike Ach said. “I just ask her to better herself, with the result being what it is.”

Blake had long been a Class 1A power, winning five consecutive titles from 2015 to 2019, before opting up to Class 2A. The Bears needed to avenge two regular-season losses, to Benilde-St. Margaret’s and Edina, in section play just to get a chance to play for a state title.

Now they’re two matches away from a large-school state title.

Ach said that previous state tournament experience, regardless of class, made a difference Tuesday.

“This is huge,” he said. “It helped us to be in the state tournament a number of years in a row in [Class 1A].” he said. “We come here, we know how to check in, we know what to do, whether it’s the first match of the day or the last one. The veterans knew what to expect.”

Breck, the No. 1-ranked team in Class 1A, upended the team expected to be its biggest challenger, downing Rochester Lourdes 5-2. The Mustangs will meet Fairmont, a 7-0 victory over Morris Area, in Wednesday’s first semifinal at Reed-Sweatt Family Tennis Center in Minneapolis.