Competition against Class 2A tennis teams toughened the Mustangs for the 1A tournament. 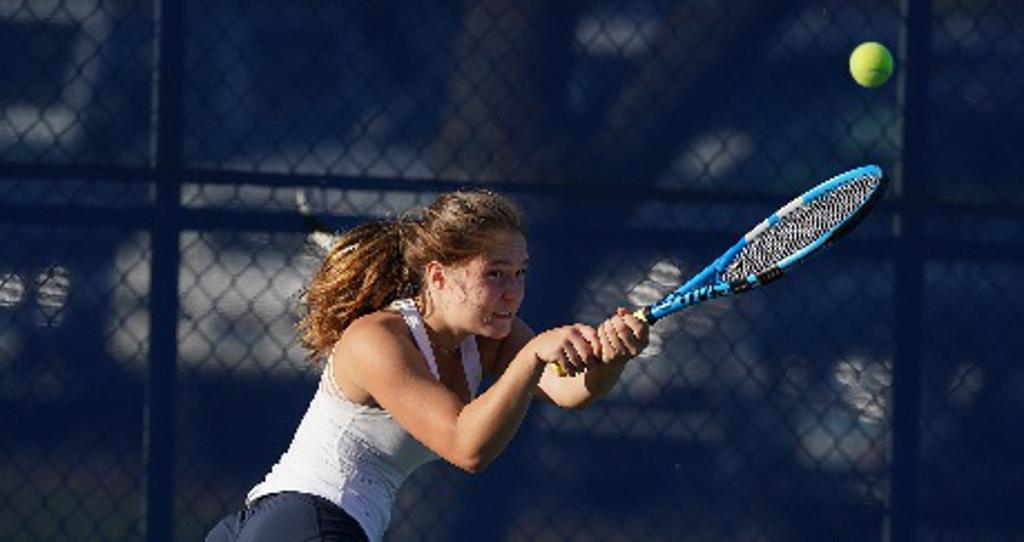 Senior Ellie Pirtle (shown in 2020) and Breck weathered a stiff schedule including several Class 2A girls’ tennis teams that helped the Mustangs qualify for the Class 1A tournament, which begins Tuesday. Photo by Richard Tsong-Taatarii, Star Tribune

At the start of the season, Breck coach Katie Wessman was looking for her veteran players to provide leadership.

“We graduated 10 seniors this past year,” she said, “so it’s been a rebuilding season with our returners really stepping up to guide this team. Everyone has put in the hard work and the results show that.”

After a daunting schedule, the Mustangs are bidding for their first Class 1A title since 2014. The Mustangs were 8-5 during the regular season, with all five losses to Class 2A schools. Four of the losses were to teams ranked in the Class 2A poll, two by scores of 4-3.

“It’s good for the team to play these high-level matches to expose some weaknesses that we can work on throughout the season,” Wessman said. “As a coach, I try to give them a balanced match schedule. Playing these bigger schools is a way of keeping them honest to their game and constantly working on a skill set.”

The Mustangs face Rochester Lourdes in their quarterfinal match Tuesday. The teams met last month, with the Mustangs winning 6-1.

“It’s a new day and potentially a new lineup,” Wessman said. “We just need to stick with what we know and play the way we train. The No. 1 singles spot went to a third-set tiebreak last time we played, so I anticipate a strong, competitive match between those two girls.”

Unlike the Class 2A tournament bracket, which is seeded, the Class 1A bracket has predetermined pairings. Thus Breck, ranked No. 1 in the final Class 1A regular-season poll, and No. 2-rated Rochester Lourdes drew each other in the quarterfinals.

Rochester Lourdes qualified for the state tournament for the 27th consecutive year. The Eagles, who do not have any seniors and have only one junior on their roster, are looking for their first state title since 2010. The Eagles lost to Blake in the Class 1A championship match in 2019.

The Class 1A quarterfinals also feature No. 5 Litchfield vs. No. 3 Pine City, No. 10 Providence Academy vs. No. 6 Crookston and No. 7 Fairmont vs. unranked Morris Area/West Central Area.

Pine City’s first three singles players (Ella Sell, Addie Sell and Brooke Boland) are granddaughters of Dragons volunteer assistant coach John Eberhart. Eberhart, who was the head coach of the girls’ program for 21 years and the Pine City boys’ coach for 25 years, is a member of the State Tennis Coaches Association Hall of Fame.

Minnetonka, which lost to Edina in the Class 2A championship match in 2019 and is unbeaten over the past two seasons, is looking for its first state title since 1975.

The Skippers, who are the No. 1 seed, have a balanced lineup. They advanced two singles players (Sarah Shahbaz and Kelsey Phillips) and two doubles teams (Annika Elvestrom/Karina Elvestrom and Maddie Prondzinski/Emma Medzuikaite) to the state individual tournament.

Rochester Mayo is the No. 2 seed. The Spartans (20-1) are led by freshman Claire Loftus, who is ranked No. 5 in Class 2A singles. The Spartans lost to Minnetonka 5-2 in the regular season.

Blake, which won five consecutive Class 1A titles between 2015 and 2019, is the third seed, followed by Mounds View and Elk River.