Swenson repeated as champion after winning two years ago as a freshman. Breck's Clayton Haberman won the Class 1A singles title and teammates Ishan Nadkarni and Zach Piehl took the doubles crown. 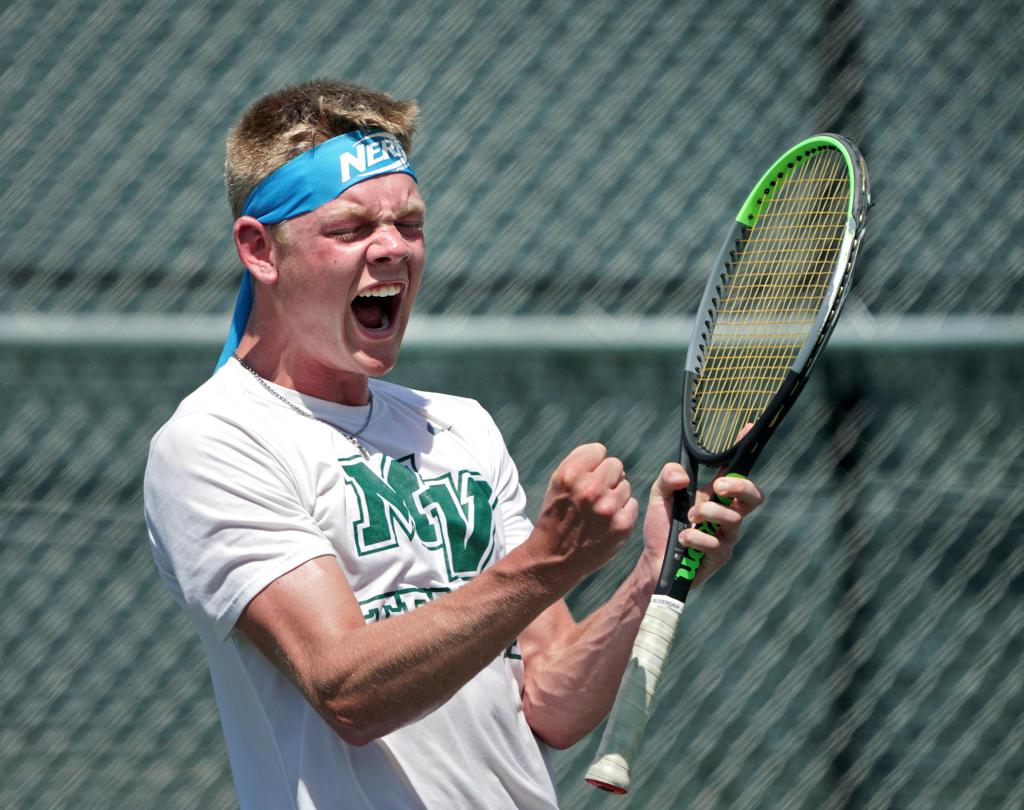 The headband, blue with the word “Nerf” printed on it, had sat in Bjorn Swenson’s tennis racquet bag for the better part of two years.

Headbands are a ubiquitous part of the Mounds View junior’s tennis attire. “I have a lot of them,” Swenson said.

This one was special, however. He wore it when he won the Class 2A singles championship as a ninth-grader in 2019. With another state title on the line Friday at Prior Lake High School, Swenson felt the time was right to break out that hallowed piece of head gear.

It wasn’t only the reason he was able to defeat Edina sophomore Matthew Fullerton 6-2, 6-4 for his second individual state title, considering his powerful groundstrokes and deft touch at the net. But it certainly didn’t hurt.

“This has got to be my favorite one,” Swenson said. “I wore it at the state championship when I was a freshman, so I decided today to throw it on again. It had it stay in my tennis bag for two years.”

In the time between Swenson’s state championships, he had built his tennis game significantly. Undefeated going into the finals and ranked No. 1 in the state regardless of class, he had moved up the national USTA Junior rankings list. He is No. 3 overall for players under 18.

But he remained committed to high school tennis. He lamented not having a season in 2020, wiped out by the pandemic, saying it was “such a bummer missing out last season. I was out there every day, training. It was something I was thinking about every day.”

Fullerton, a hard-hitting sophomore from Edina, made Swenson earn every point in the finals. Employing his own set of hard-to-handle ground strokes and ability to counter Swenson’s power style, he battled back in the second set and took a 4-3 lead.

“He hits so hard and opens up the court so well,” Fullerton said. “I tried to get him off the court as much as I could and I think I did it pretty well. Just made a few mistakes.”

Swenson regrouped and won the last three games, closing out the match with a victory at love.

“I was just saying ‘C’mon, c’mon. Let’s go, here we go,’ everything I could do to pump myself up and motivate me to win,” Swenson said. “He’s a great player. He was also undefeated this year, so I knew when we clashed, it was going to be a battle. I just had to stay in there and fight for every point.”

Edina’s doubles team of Luke Westholder and Otto Schreiners has played together all season. That familiarity keyed the duo to a 7-5, 6-4 victory over Mounds View brothers Christo and Emmanuel Alex in the Class 2A doubles final.

“It feels amazing,” said Westholder when asked about helping Edina win a team championship and following up with a doubles title. “I couldn’t have asked for anything better than this. This is a great way to end my high school tennis career, especially a doubles partner I love to play with.”

Class 1A
Breck made it a clean sweep of Class 1A championships with victories in both singles and doubles Friday at St. Cloud Tech to go with its team title won Wednesday.

It took two years to do it but Mounds View junior Bjorn Swenson defended his Class 2A boys' tennis singles title.

Swenson, who won the title as a freshman in 2019, defeated Edina's Matthew Fullerton 6-2, 6-4 to repeat as champion Friday at Prior Lake High School.

The COVID-19 pandemic wiped out the 2020 spring sports season.

In Class 1A, Breck swept the singles and doubles championships Friday in matches played at St. Cloud Tech High School.

Check back later for more on the matches.