The matches were played outside amid the unusual heat wave gripping Minnesota. 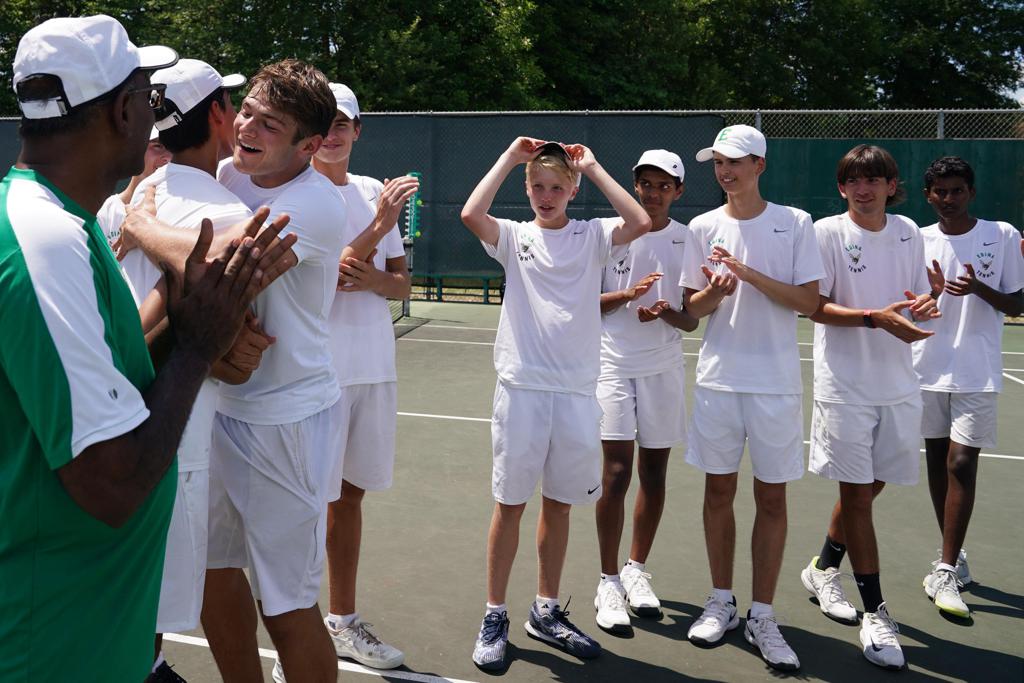 Edina tennis players celebrated when they realized they had clinched the Class 2A boys' team championship Wednesday in their match against Wayzata played at Prior Lake High School. Photo: ANTHONY SOUFFLE • anthony.souffle@startribune.com

Going into the season, Edina boys’ tennis coach Gary Aasen was more uncertain than he had ever been in more than 20 years at the helm.

Tennis is a way of life at Edina, so talent is rarely a concern. But it had been two years since the Hornets had fielded a team and much had changed. Veteran players — senior leaders — were gone, having been denied a final season by the pandemic.

In their place were 10 newcomers, with experience limited to junior varsity where Aasen rarely got to see them.

“I didn’t even know their names. I had never seen them play a match because I didn’t get to see them last year,” Aasen said. “I had to break in 10 new guys and get them in place and see if they could be a team.”

Aasen leaned heavily into his five veterans Matthew Fullerton, Oskar Jansson, Luke Westholder, Otto Schreiner and Nolan Ranger — to lead the way to whatever success could be had.

Edina defeated previously unbeaten Wayzata 4-3 in the Class 2A team championship match Wednesday, giving the Hornets their 24th state championship and first since 2009. The final score was a little deceiving as Edina led 4-0 and did not complete their final three matches due to the withering heat at Prior Lake High School.

Fullerton said the experienced fivesome embraced their role as mentors, consistently emphasizing what it took to play in big matches.

“We kept talking to them about what it feels like to play in a match where you really have to step up,” he said. “We kept reinforcing it throughout practice and guiding the younger players.”

Wayzata had defeated Edina twice during the regular season, but those matches were played in a three-day stretch when the Hornets’ top three singles players — Fullerton, Jansson and Ranger — were out of the lineup. The Hornets were at full-strength Wednesday and were itching to play Wayzata.

“We hadn’t beaten them before,” said Fullerton, adding that it contributed to a bit of added stress before the match. “But at the same time, I thought we played really freely and did what we needed to do to win. We were the better team.”

Said Westholder, the Hornets’ lone senior, “I’ve spent all my career on varsity wanting to win state. This is so emotional, yet so amazing.”

Class 1A
Breck swept through the Class 1A field, losing just one individual match, to win its ninth team championship at St. Cloud Tech High School.

The Mustangs defeated Rochester Lourdes 7-0 in the semifinals and Mound Westonka 5-0 in the finals, with two matches not completed due to heat.

Breck senior Clayton Haberman, the Mustangs’ top singles player, said the schedule they played during the regular season, against some of the top Class 2A teams, paid dividends in the state tournament. They went 4-4 against large-school programs.

“We thought we were a championship-caliber team at the start, but the energy and hype didn’t happen right away,” Haberman told Tim Leighton of the Minnesota State High School League. “The losses to Class AA schools were important because they helped in our growth and challenged us to be better.”

Breck coach Sion Wilkins said the rugged schedule he put his team through worked the way he planned.

“The boys played their best tennis of the season at end here, and that is definitely what you want to see,” he said.

In both classes, all quarterfinals will start at noon at their originally scheduled site.