The sophomore backed up her No. 1 seeding in the state tournament, using a deft strategy of defense and opportunistic play to defeat Edina’s Nicole Copeland. 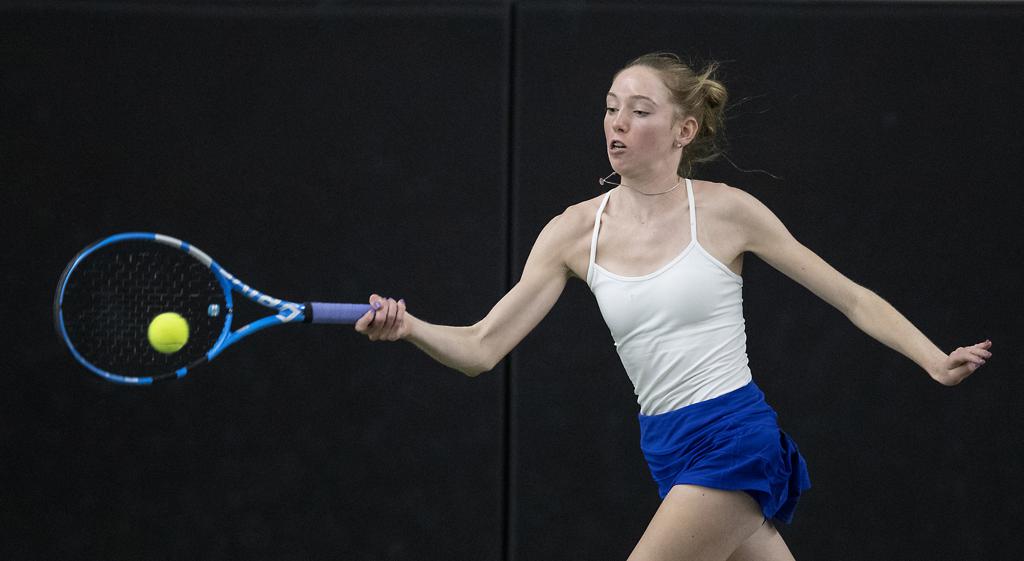 Karin Young woke up Friday a bundle of nerves. The Eastview sophomore has played oodles of high level tennis in her life, but this was different. A state championship was on the line.

But by the time Young and Edina’s Nicole Copeland squared off for the Class 2A state title on Friday, those nerves were under control. And soon after, so was Copeland.

Young employed a defensive strategy that frustrated the two-time state champion. She also sprinkled in enough diversity to take advantage of opportunities when they arose to win her first state singles championship, besting Copeland 6-4, 6-1.

“I think I did a good job of relaxing and just forgetting about all the pressure,” Young said.

It helped that she had defeated Copeland twice in recent weeks in section play, victories that earned her the tournament’s No. 1 seed.

“I knew how good of a player she is and how close our matches can be,” Young said. “I was just focused on playing my best game and blocking out all of the surroundings.”

Her victory was a salve for two years of frustration for Young, whose father is University of Minnesota men’s tennis coach Geoff Young. After finishing as runner-up in doubles as a seventh-grader in 2016, she was sidelined in 2017 by an injury that prompted her to play on the boys’ team in the spring of 2018. Last fall she failed to qualify for the girls’ state tournament after losing in the section semifinals.

“Last year was definitely upsetting, but I tried to use it to motivate me,” she said. “I made the mistake of putting too much pressure on myself, so I learned from that. Winning this means a lot to me. It’s one of my favorite tournaments.”

Copeland’s game is largely one of power, keeping the pressure on opponents by hitting the ball with depth and pace, and attacking mistakes. Young countered that strategy to near perfection Friday, bringing back ball after ball and forcing Copeland to play her style.

“I was trying to keep the ball deep to get it out of her strike zone,” Young said.

Copeland was up for the challenge early, winning consecutive games to reach a 4-4 tie in the first set. She had a chance to even the set at five games apiece, but Young stood firm, winning three consecutive points to take the first set 6-4.

In the second set, Young’s consistency started to take a toll. Shots Copeland normally handles with ease were landing just outside the lines. Young won the first three games and controlled the match from there.

“She’s a nice defensive player,” Copeland said. “She always hits the ball back in play. It’s more frustrating than difficult because you always have a lob coming. You have to deal with it.”

While she failed to become the fourth Edina player to win three singles championships, Copeland said she was happy with her overall high school career, which featured five team and two individual titles

“I’m couldn’t have asked for a better experience here,” she said. “Can’t complain.”

In Class 2A doubles, Minnetonka’s Sarah Shahbaz and Annika Elvestrom put a shaky second set behind them and controlled the third and final set to defeating Julia Baber and Paige Sargent of Rochester Century 6-3, 3-6, 6-2 to win the championship.