Two-time 2A singles champ from Edina has upped her game

Nicole Copeland, seeded second in the tennis state tournament, said she’s been working to finish off points at the net. She’ll play Friday in the semifinals. 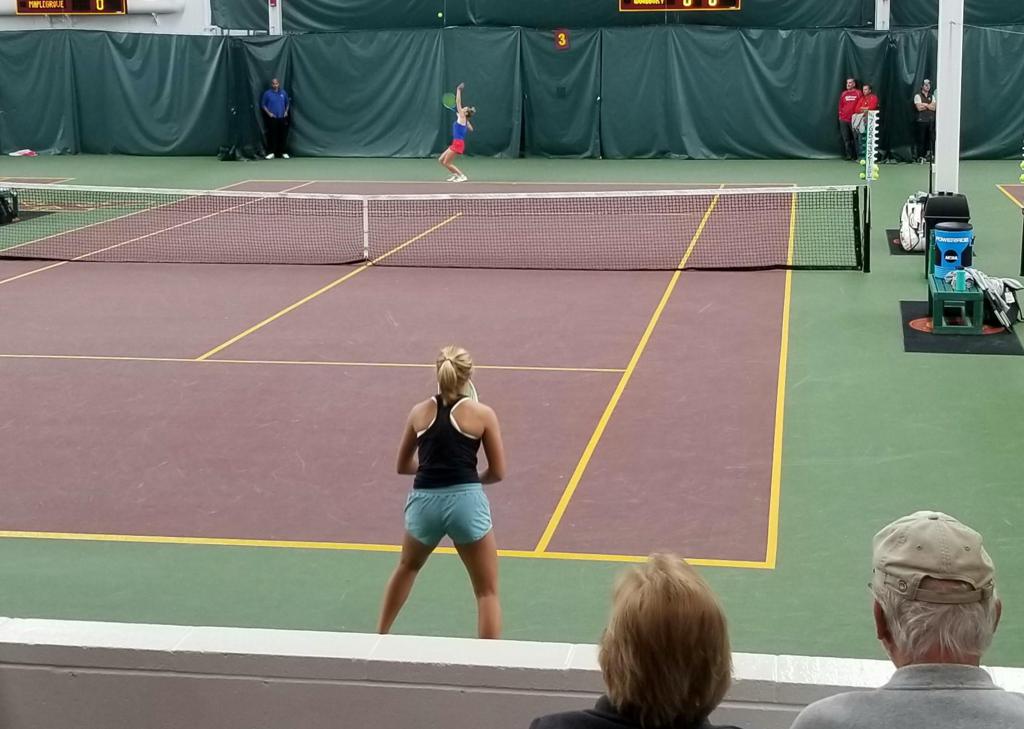 Senior Nicole Snezhko of Armstrong serves to senior Delaney Schurhamer of Woodbury in their match Thursday. Schurhamer, the No. 4 seed, defeated fifth-seeded Snezhko 6-1, 6-1 in the quarterfinals. Photo: Heather Rule, special to the Star Tribune

If Edina senior Nicole Copeland feels any added pressure as the two-time defending Class 2A girls’ singles champion, she’s certainly not showing it.

“I feel like I earned my spot here, so I’m happy with the pressure,” Copeland said Thurday at Baseline Tennis Center at the University of Minnesota. “I always take pressure as a privilege.”

The No. 2-seeded Copeland won both of her matches in the girls’ tennis state tournament. She won her first match 6-0, 6-2 and then defeated St. Cloud Tech junior Ashley Tarrolly 6-1, 6-3 in the quarterfinal.

Copeland fell behind in the second set against Tarrolly 2-1 before grabbing leads of 3-2 and 4-3 on her way to closing out the match. Though she had to adjust to Tarrolly changing the pace of the ball early in the second set, Copeland didn’t let the deficit balloon.

Besides using her powerful ground strokes, Copeland also won points with her volleys and overhead winners at the net. It’s a change from the past two years when, Copeland said, she was more of a baseline player “just kind of scrapping balls back.”

It’s something she said she’s worked on improving over the past year.

“I’ve been trying to become a more full-court player and come into the net and try and finish points at the net more,” Copeland said. “It’s been working pretty well.”

Even though she’s seeking her third state singles title, she’s not focused on comparing this tournament to years past. The last three-time Class 2A singles champion was Edina’s Whitney Taney, who won in 2004-06.

Copeland will face Maple Grove sophomore Zoe Adkins in the semifinals Friday in a rematch from last year.

Adkins, who took third last year as an unseeded player, won her quarterfinal 3-6, 6-0, 3-0 over Roseville sophomore Nicole Ridenour, who retired in the third set with a back injury. In the first, unseeded Ridenour got off to a 4-1 lead before taking the set.

“It just wasn’t my best tennis,” said Adkins, the No. 3 seed. “But I think she made me play worse. So all the credit to her. It’s too bad she got hurt, because I feel like it could’ve been a more competitive second set.”

Top-seeded Karin Young, an Eastview sophomore, only dropped two games in her pair of matches to advance to the semifinals. She will face Woodbury senior and No. 4 seed Delaney Schurhamer, who defeated the fifth-seeded Nicole Snezhko, a senior from Robbinsdale Armstrong, 6-1, 6-1 in the quarterfinals.

The top three seeds in the Class 1A singles tournament advanced Thursday to the quarterfinals set for 8 a.m. Friday at Reed-Sweatt Family Tennis Center in Minneapolis.

Defending state champion Arlina Shen of Blake will play sophomore and fifth-seeded Megan Muller of Pequot Lakes. The other semifinal will be senior Clare Palen of Rochester Lourdes, the No. 2 seed, against Blake junior Sonia Baig, seeded third.