The Hornets on Wednesday won their 23rd state championship under Paulsen, who announced that he's retiring after this season. 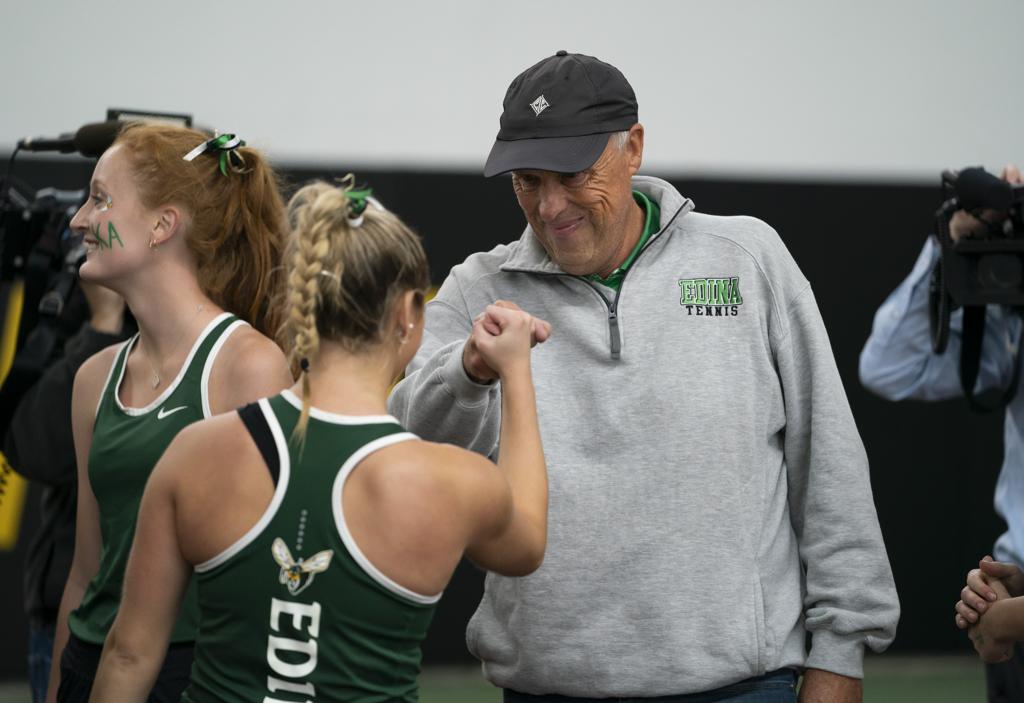 Steve Paulsen leaned back against a tennis net, watching his Edina Hornets players being honored after winning the Class 2A girls’ tennis state championship with a 5-2 victory over No. 2-seeded Minnetonka.

Subtly, without drawing notice, he raised his left hand to his eyes, wiping away a gathering of tears.

This was it. After 28 years, after 23 state titles, including 19 in a row, after 608 victories, Paulsen was calling it quits.

And when his name was announced near the end of the awards ceremony, the usual polite applause rose to a roar in recognition of his remarkable accomplishments.

Minnetonka coach Dave Stearns said what most everyone at Baseline Tennis Center was thinking. “I’m really happy that he could go out this way,” Stearns said. “Obviously, I would have wanted our team to win, but I’m happy for him because he’s a really good guy.”

This was unusual territory. Paulsen is never one to call attention to himself, preferring to make his players the objects of attention. But this time, Paulsen admitted he spent time soaking in one last state tournament experience.

Edina’s opponent in the final, Minnetonka, was fitting for the moment. The talented but young Skippers have been buzzing around the Hornets all season, pushing them in conference play, taking them down to the wire in a pair of previous matches. Most expected a tightly-contested final.

No one left disappointed. A larger-than-usual crowd for the final saw a back and forth match, with Minnetonka appearing to have an early advantage, only to see Edina’s experience show through at the end.

With the match tied 2-2, Edina’s No. 1 doubles team of seniors Jessica Ip and Shay Reger won a close 6-4, 7-5 victory. Senior Nicole Copeland, the two-time Class 3A singles championship, picked up the game-winning point just minutes later when she put away Minnetonka’s Sarah Shahbaz 6-4, 1-6, 6-2 at No. 1 singles.

“I knew it was going to be a battle and it was,” Paulsen said. “But [we brought] our A game, somehow, some way. We just love being here.”

“This was such a difference because it’s his last year,” said Copeland, finishing her sixth year with the team. “Just seeing him tear up makes me tear up and made everyone so happy.”

Paulsen’s lasting affect on the team, Copeland said, was his knack for getting a bunch of girls playing a largely individual sport to come together as a team, year-in and year-out.

“He shaped us,” she said. “Our motto was always ‘What can we do to make the team better?’ ”

Copeland will get started on defending her back-to-back singles titles Thursday but admitted that the team title is nearest to her heart.

“This is more meaningful because we’re all together, just one big happy family,” she said. “We did not want to lose for many reasons: For us and for Steve. We just wanted to finish strong.”

Paulsen has two more days at the tournament, coaching Copeland in singles and Ip and Reger in doubles, but the team, and the players who’ve made up those teams, are what he’ll remember.

“I’ve had so many well wishers and former players that have e-mailed and texted me,” he said. “It just means the world to me.”