Minnetonka freshman happy she made switch to team tennis

Sarah Shahbaz open-enrolled to attend Minnetonka schools her entire academic life but the USTA tennis player had not competed in the school program until friends urged her to start playing this season. 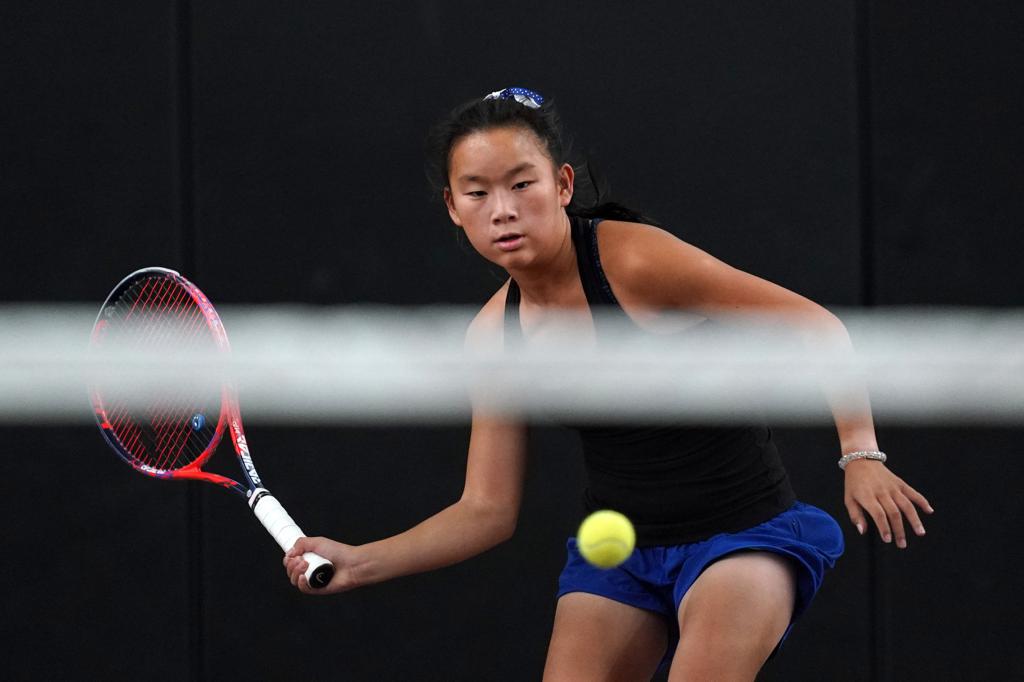 Sarah Shahbaz lives in Ham Lake but has open-enrolled in the Minnetonka School District for her entire academic life, drawn by its Chinese immersion program.

Until this season, however, Shahbaz’s tennis life had been strictly USTA. High school tennis had never been in the picture.

At the urging of longtime friend and current teammate Annika Elvestrom, Shahbaz decided to play for the Skippers this season. And she’s glad she did.

Shahbaz, a freshman, played No. 1 singles for much of the year. She was little nervous Tuesday before the Class 2A quarterfinals at Baseline Tennis Center at the University of Minnesota. But she didn’t let that affect her play, defeating Becker’s Courtney Nuest 6-0, 6-0 and helping No. 2-seeded Minnetonka to a 7-0 victory over the Bulldogs, a first-time entrant.

“I always wanted to play on a team that cares about other things and not just your own result,” Shahbaz said. “I’m definitely glad I did this. The whole experience has exceeded my expectations. Everyone cheers for each other. It makes you want to win more.”

While becoming friends during USTA tennis, Elvestrom and her sister, Karina, had been talking at length to Shahbaz about playing for the Skippers. When Shahbaz entered high school this year, they figured the time was right. They went out of their way to make the transition to high school tennis as easy as possible, opening their home to her when circumstances made it difficult for Shahbaz to make the trip home.

“She’s been a great addition to the team,” Annika Elvestrom said. “We basically said anything she needs, we’ll help. She even stays at our home if she needs to. My sister and I joke that it’s nice to have another tennis person there.”

The addition of Shahbaz has elevated Minnetonka, already balanced and deep, to solid state-championship contender. The Skippers lost two tight 4-3 matches to favorite Edina during the season. In the final meeting, Minnetonka held a 3-2 lead and had two match points at No. 2 doubles but couldn’t close out the match.

“We’ve talked to the girls about finishing,” Minnetonka coach Dave Stearns said. “About staying focused. And they’re responding. This team is more ready than any team I’ve coached.”

If Minnetonka hopes to get one more shot at Edina in the final, it will have to get past No. 3-seeded Mounds View in the semifinals. The Mustangs defeated Woodbury 5-2 in the last quarterfinal on Tuesday.

With the pending retirement of longtime coach Steve Paulsen, the players on the Edina tennis team have had a bit more on their minds than usual.

Their usual self-focused mind-set has been pierced by thoughts of trying to win one more title, which would be the 23rd, for their coach.

“It’s been a little of both,” senior captain Jessica Ip said. “Thinking about what we have to do and then we’re also thinking about that.”

The top-seeded Hornets got off to a strong start in the quarterfinals, sweeping Wayzata 7-0.

Ip said the team was taken aback when Paulsen told them a few weeks ago that this would be his last season.

“We were shocked,” she said. “He’s been coach since before we were born. It’s weird thinking about him not being here.”

The Hornets will face Rochester Mayo on Wednesday in the team semifinals, with the winner advancing to the final later in the day. Mayo defeated Elk River 5-2.

Four-time defending champion Blake took the first step toward a fifth consecutive state title with a 7-0 victory over Thief River Falls at Reed-Sweatt Family Tennis Center. The Bears will meet Litchfield, a 6-1 winner over Minnewaska, in Wednesday’s semifinals. Pequot Lakes beat New London-Spicer 6-1 and will play Rochester Lourdes, a 6-1 winner over Blue Earth, in the other semifinal.