Steve Paulsen admits that in his early days he was apprehensive of the pressure that comes with being at a school renown for student achievement. That was 22 state titles ago. 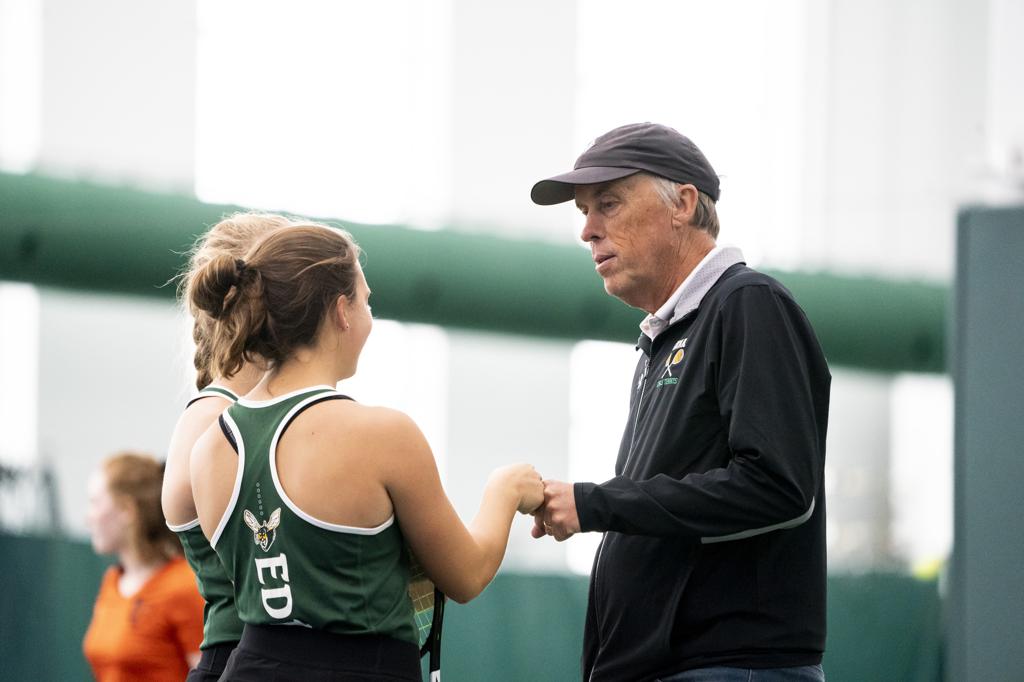 When Edina girls’ tennis coach Steve Paulsen walks into Baseline Tennis Center on Tuesday, he’ll open the final chapter in the story of his amazing run as the most successful coach in state history.

After 28 seasons, 22 state championships (and working on another), hundreds of match victories and just as many lives touched, Paulsen is calling it quits.

There’s no overriding issue, no health concerns other than those expected of a 56-year-old man, no burnout.

The easy-going Paulsen will coach — guide might be more apropos — the Hornets as they seek their 23rd Class 2A team championship under his watch. It’s a record unparalleled in state history, as is Edina’s streak of 19 consecutive state championships, snapped in 2016 by Mahtomedi.

Through it all, Paulsen’s style has never wavered. He’s the same calm, thoughtful figurehead whether the Hornets are battling through three-set nailbiters or cruising past an overmatched opponent. The voice is never raised other than when he lets go with his frequent staccato laugh and wide smile.

A graduate of Northfield High School and St. Olaf College, Paulsen was teaching math at Minneapolis Henry in the late 1980s, and also teaching tennis at local country clubs. He took a job coaching the Edina boys in 1988 before moving over to the girls’ team in 1992. Five years later came the first team title.

“I was a little apprehensive at first because there was so much pressure that went along with the job,” he recalled. “That’s come full circle now.”

He figured out quickly that respecting his players was the best way to get results.

“One of the biggest things we can do as coaches is keep an open line of communication,” he said.

That’s essential at all levels of coaching, Paulsen said. At Edina, where standards are high and expectations higher, it’s vital. So he’s always stressed making sure his players know where they stand and communicate that to their parents.

“I can’t emphasize that the kids take responsibility,” he said. “The vast majority of issues we’ve had in the past about things like positions are typically solved by conversations with the kids.”

The message of those conversations?

“It’s about the team. Leave the egos at the door,” he said.

One of his methods for getting players to buy into the team concept at the heart of Edina’s success is a questionaire he hands out to the players before each season.

“One of the questions is ‘What position do you want to play?’ The young ones don’t know the answer and they’ll say where they want to play,” Paulsen said. “The older players know the right answer is ‘Whatever is best for the team.’ It takes a year or two, but the younger players always figure it out.”

Getting Paulsen to specify a favorite player or season is difficult, but a few memories stand out.

“It’s hard to pick out any one special player or team,” he said. “Certainly Whitney [Taney’s] undefeated career sticks out. One-hundred-sixty-six [victories] in a row. That was pretty special.”

Since he announced his retirement from high school coaching, he’s been flooded with messages from well-wishers and supporters, giving him a chance to reflect on the mark he’s made.

“I’ve been overwhelmed by the hundreds of calls and texts, wishing me good things,” said Paulsen, whose full-time job is director of racquet sports at Interlachen Country Club. “I love seeing what the players have gone on to in the real world. There are doctors and lawyers. A lot of them are coaches. It’s been so much fun revisiting and knowing they had a great experience here. That’s as good as it gets.”

When: Tuesday through Friday

Class 2A: Edina, the top seed and ranked No. 1 all season, is shooting for its third consecutive team title and 22nd in the last 23 years. The Hornets’ top challenger looks to be Lake Conference rival and No. 2 seed Minnetonka. The Hornets are led by senior Nicole Copeland, who is shooting for her third consecutive singles title. But it’s far from a done deal. She lost in the Section 6 singles final to Karin Young of Eastview, who is the top seed in the field.

Class 1A: Blake has won the last four team titles and is a strong favorite to win a fifth. The Bears No. 1 singles player, senior Arlina Shen, is the defending state champion and earned the No. 1 seed. Rochester Lourdes senior Clare Palen is the No. 2 seed.