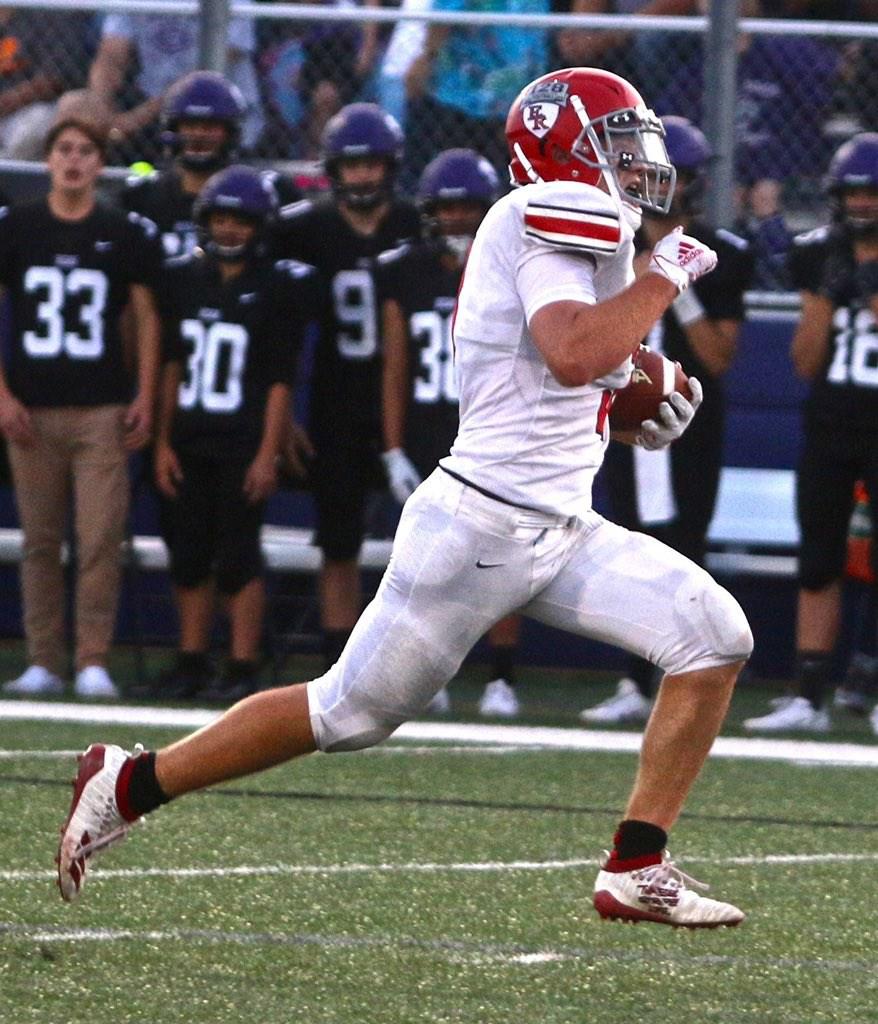 One year ago, Nordstrom was in street clothes on the Elk River sideline, waylaid by the recurrence of a childhood condition characterized by low levels of platelets in his blood that can cause excessive bruising and bleeding.

“It was pretty tough to watch last year, with all your buddies out there,” Nordstrom said. “I just had to remember the blessings I had and keep fighting.”

Three of Nordstrom’s touchdowns came in the second half when the Elks were clinging to razor-thin leads. They would not have happened, he said, without the Elks’ precision blocking and deft fakes, two hallmarks of their offense.

“You can’t have 80-yard runs without great blocking and fakes,” he said.

After a season away, Nordstrom said he has a renewed fondness for the game.

“When you love sports as much as I do, you can take it for granted,” he said. “I think now, I do appreciate it a little bit more.”

Copeland, the two-time defending Class 2A champ, remained undefeated with a 6-1, 6-0 victory over Minnetonka’s Sarah Shahbaz as the Hornets defeated the Skippers 4-3 in the finals of the Edina Invitational. “Minnetonka is our biggest competition this year, so I’m super happy,” she said.

The Beacons had a 6-0 week, highlighted by winning the Apple Valley Aerie Challenge, defeating Centennial in the final. The junior outside hitter led their offensive effort with 66 total kills with a .398 hitting percentage. She had 17 ace serves and added 54 digs.

The senior hitter/setter combo has come out from the shadow of her older sister Sydney to become a force in her own right. In seven matches, the versatile Hilley had 75 kills while hitting at a .495 clip. She added 115 set assists, 34 digs, six blocks and eight ace serves.

In three road games last week, the senior attacker and team captain scored seven goals and had an assist as the Magic went 3-0. He scored two goals apiece in victories over Orono and Chisago Lakes, and had a hat trick and an assist in a 4-2 victory over Mound Westonka.

The senior running back has put up back-to-back 200-yard rushing games. He ran for 205 yards in a 49-27 victory over Bloomington Kennedy and had 237 yards in a 45-20 rout of Providence Academy. He scored three touchdowns in each game.

The senior linebacker and team-leading tackler a year ago has picked up where he left off last season. Merila made 16 tackles and intercepted two passes in a 21-14 victory at Minnetonka. He also is a standout baseball player.