The No. 4 seed has played sophomore Sujit Chepuri many times but their match Thursday in the Class 2A state tournament added to a list of top battles. 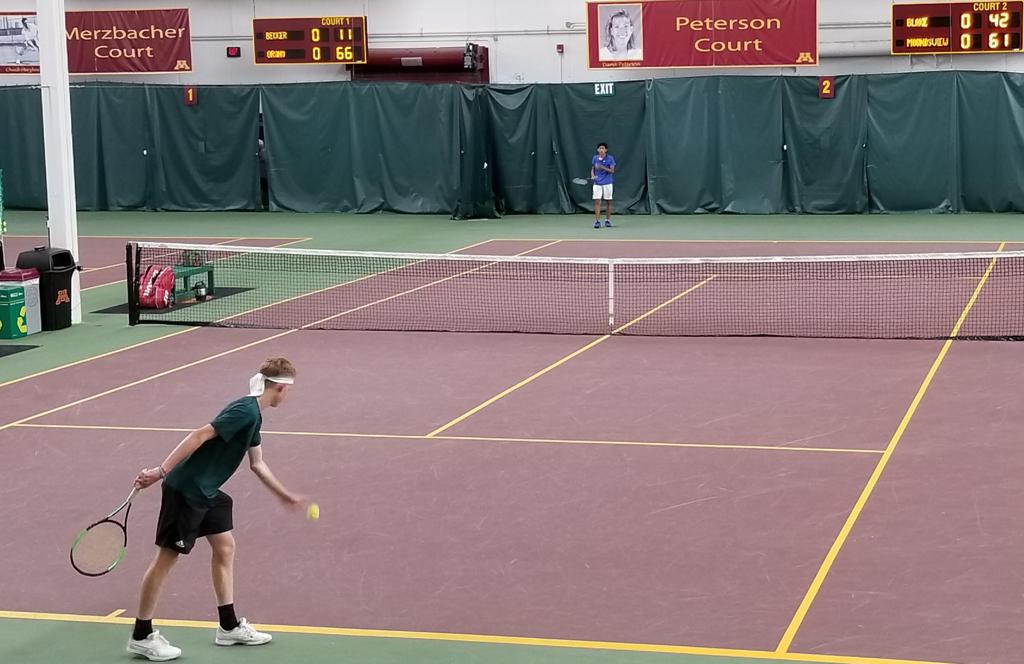 Mounds View freshman Bjorn Swenson, the No. 4 seed in the Class 2A boys’ tennis individual tournament, said he’s played fifth-seeded Blake sophomore Sujit Chepuri probably 20 times. Every time they step on the same court, everyone knows it will be a good match, Swenson said.

But the Class 2A quarterfinal on Thursday might have surpassed expectations. The friendly rivals put on a 3-hour, 3-set marathon of solid back-and-forth tennis with no clear front runner until match point was won.

It was just the kind of match Swenson said he wanted.

“Just a very, very memorable match,” said Swenson, who defeated Chepuri 6-4, 4-6, 6-3 at Baseline Tennis Center at the University of Minnesota. “That was definitely one of the longest matches I’ve ever played.”

One of Swenson’s most impressive showings was his first-set victory. He lost a long deuce game on his serve to go down a break, 2-1. Chepuri extended the lead to 4-1 before Swenson stormed all the way back to take the set.

Staring at that deficit was frustrating, Swenson said, “but you’ve got to stay positive. I just did whatever I could to will myself to win that set.”

There weren’t many quick games or easy points to be found throughout the match. Swenson picked the corners with his ground strokes, forcing Chepuri to run around the court to return them. They both played so well, the match could’ve gone either way, Swenson said.

“He was just running me around so much throughout the entire match, that you can’t keep doing that for three hours, and eventually I ran out of gas,” Chepuri said.

But top-seeded Gavin Young, a sophomore from Eastview, withdrew from the singles tournament. He was unable to complete his match Wednesday against Swenson in the team championship after suffering an Achilles tendon injury. Unseeded Orono senior Karthik Papisetty advanced to the semifinal in that part of the draw and will face Swenson.

The top four seeds all won their matches Thursday and advanced to the semifinals Friday at Reed-Sweatt Tennis Center.

The finals in both classes are scheduled for 11:30 a.m. Friday.