Wednesday's victory was secured in a matter-of-fact manner, missing that surge of emotion that often accompanies a championship. 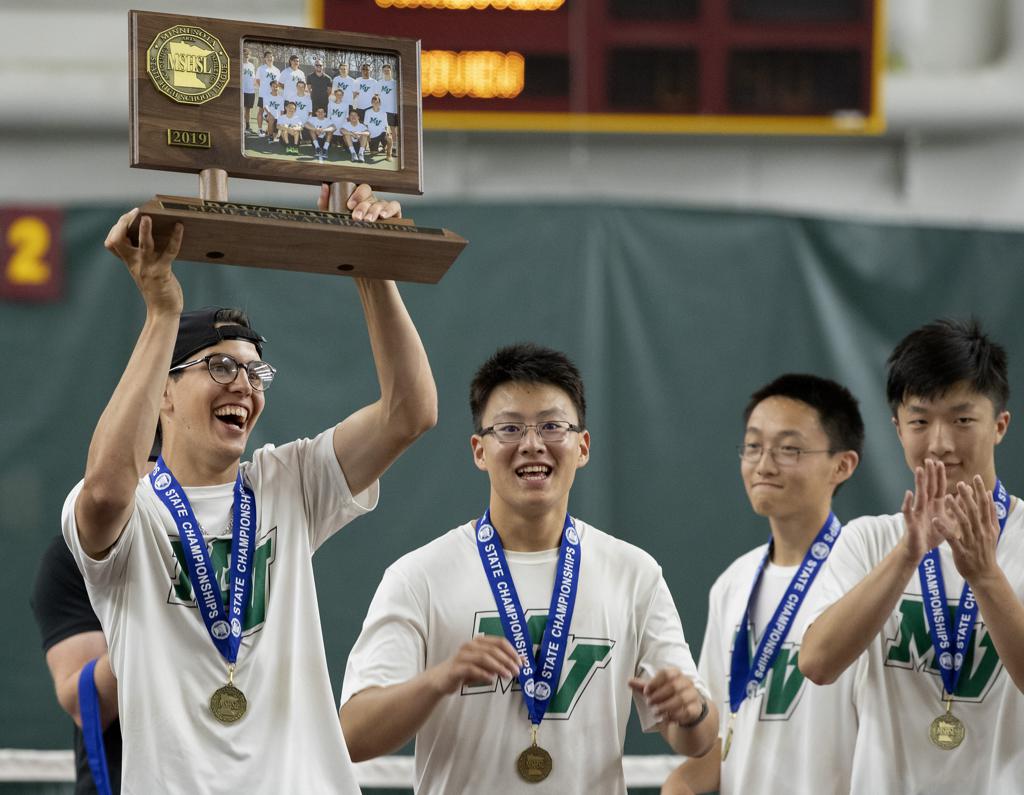 Mounds View’s 5-2 victory over Eastview in the boys’ tennis Class 2A team championship match was more an affirmation of a team’s greatness than a celebration of victory.

The Mustangs were appropriately thrilled at winning the program’s second title in five seasons and fourth overall, but victory was secured in a matter-of-fact manner, missing that surge of emotion that often accompanies a championship.

“There wasn’t anyone around to celebrate with, like when we won it 2015,” said tri-captain Michael Cao, who completed his sixth year on the team. “Our No. 4 singles clinched [the victory], but me and a few others were the only ones around at the clinching moment. It felt surreal. I was looking around for people to share it with.”

Mounds View entered the tournament as the No. 1 seed, the result of a late-season victory over then-No. 1-ranked Edina. Mustangs coach Scott Sundstrom was confident his team was the state’s best. The players just had to go out and show it.

“I told the kids going into the match, ‘We’re the No. 1 seed. You guys have been playing so cohesively and with so much energy, it you go in with that attitude, you’re going to win the state championship,’ ” Sundstrom said.

Eastview was coming off a tough semifinals victory over Edina, winning three grueling, emotional three-set doubles matches to beat the Hornets 4-3. Mounds View, conversely, had defeated Orono 4-3 in the early semifinal match, winning at the spots it was expected to win and had plenty of time to rest before the finals.

Mounds View got victories at Nos. 2, 3 and 4 singles from Petro Alex, Luke Turkington and Johnny Yue, Turkington’s a key come-from-behind 6-4, 6-2 after trailing 4-0 in the first set.

The most notable victory of the finals came at No. 1 singles, where Eastview’s Gavin Young, the No. 1-seeded player in the singles bracket, was facing Mounds View’s Bjorn Swenson, who was seeded fourth. Swenson won 6-4, 3-0 when Young was forced to retire due to an Achilles’ tendon injury suffered in warmups.

Young was treated by trainers between sets, but it was clear he was having difficulty playing on one good leg.

“He felt something in warmups and he tried to play, but it kept getting worse,” Eastview coach Jeff Olsen said. “We couldn’t risk further injury.”

The victory may not have had the emotional release of Mounds View’s 2015 title, when Alex, then an eighth-grader, earned the match-winning point at No. 4 singles, but Alex, now a senior, said it was just as fulfilling.

“It’s different, but we got where we wanted to be. We got that state championship,” Alex said. “It doesn’t matter that there wasn’t the excitement. We had a goal, we got our goal and that’s all that really matters.”

Young’s injury could affect the Class 2A singles tournament, which begins Thursday. He was headed to see a trainer after the awards ceremony in hopes of finding no damage to his Achilles’ tendon. If he is unable to play, Eagan’s Maxim Zagrebelny will become the top seed in the 2A bracket.