For the past five years, it’s been impossible to talk Mounds View tennis without talking about the Alex boys, five brothers who have made an indelible mark on the Mustangs. 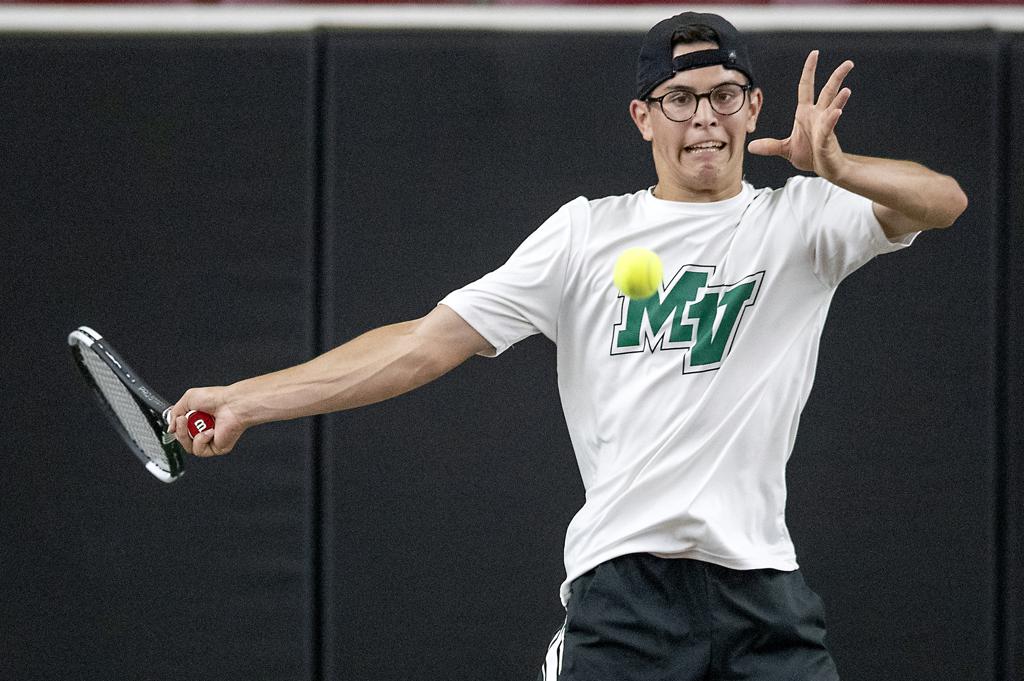 They’re aggressive and competitive, combative and driven. Best of all, they play winning tennis.

For the past five years, it’s been impossible to talk Mounds View tennis without talking about the Alex boys, five brothers who have made an indelible mark on the Mustangs.

Starting with Abe Alex, who as a senior was a key contributor to the Mustangs’ run to the 2015 Class 2A state championship, there have been at least two Alex brothers on the roster. Luke graduated after Abe, in 2017.

This year’s team features three siblings — senior Petro, freshman Christo and seventh-grader Emmanuel — all of whom won their matches Tuesday in a 7-0 victory over Lakeville South in the quarterfinals of the tennis team state tournament at the University of Minnesota Baseline Tennis Center.

Petro and Emmanuel played No. 2 and 3 singles, Christo No. 2 doubles.

A large part of the recipe for the Alex brothers’ success is that none of them take losing easy, even if it’s to another brother. And they let each other know about it.

That’s part of what makes the brothers the players they are. They come from a strong tennis background. Their mom, Kathy, played at UCLA. They grew up playing tennis in Greece, their father’s home country, before moving to Minnesota a half-dozen years ago.

All six boys — oldest brother Kosta graduated from high school before moving to Minnesota — learned that standing out meant never giving an inch.

“We fight about everything,” Christo said. “It doesn’t matter what it is. We don’t like to lose. It’s been like that since we were in Greece.”

But when it comes to joining forces, the brothers are each other’s biggest supporters.

“We all want each other to win,” said Petro, who will team with Emmanuel at doubles in the individual tournament starting Thursday. It was a pairing he requested. “I always knew I wanted to play with him someday,’’ Petro said.

Mounds View coach Scott Sundstrom stopped short of calling the Alex brothers keys to the Mustangs’ success, citing the contributions of others like freshman Bjorn Swenson, the team’s No. 1 singles player. But he won’t deny that they are vital to the team’s success.

“They have a lot of energy and competitiveness and they play a lot of tennis,” Sundstrom said. “And they’re all about the team first. That’s the most important thing.”

Orono senior singles player John Kasner spent the first part of the season battling his own perceptions of how he should be playing. He finally came to the conclusion that his biggest foe was himself.

Kasner and teammate Karthik Papisetty had been splitting time at No. 1 singles for the Spartans. When Orono coach Tim Arnold had to submit lineups to the Minnesota State High School League in mid-May, he had Papisetty at No. 1 singles and Kasner at No. 2.

Since then, Kasner has come to realize that it was time to enjoy the moment. His game improved and he went on to win the Section 2 singles title, defeating Papisetty in the final. His strong postseason run continued Tuesday when he defeated Wayzata’s Collin Beduhn 6-0, 6-1 at No. 2 singles, helping springboard No. 4-seeded Orono to a 4-3 victory over No. 5-seeded Wayzata.

“I’m moving better and staying in the present,” Kasner said of his late-season improvement. “I’m not worrying about things I can’t control. And I realized there are worse things than losing.”

In the other quarterfinals, No. 2-seeded Edina routed Duluth East 7-0 without dropping a set and No. 3-seeded Eastview defeated first-time entrant Alexandria 7-0.

Defending champion Rochester Lourdes swept the singles matches en route to a 6-1 victory over Luverne in the first Class 1A quarterfinal at Reed-Sweatt Tennis Center in south Minneapolis.

St. Paul Academy took the same route as Lourdes, their only loss coming at No. 3 doubles, in a 6-1 victory over Thief River Falls.