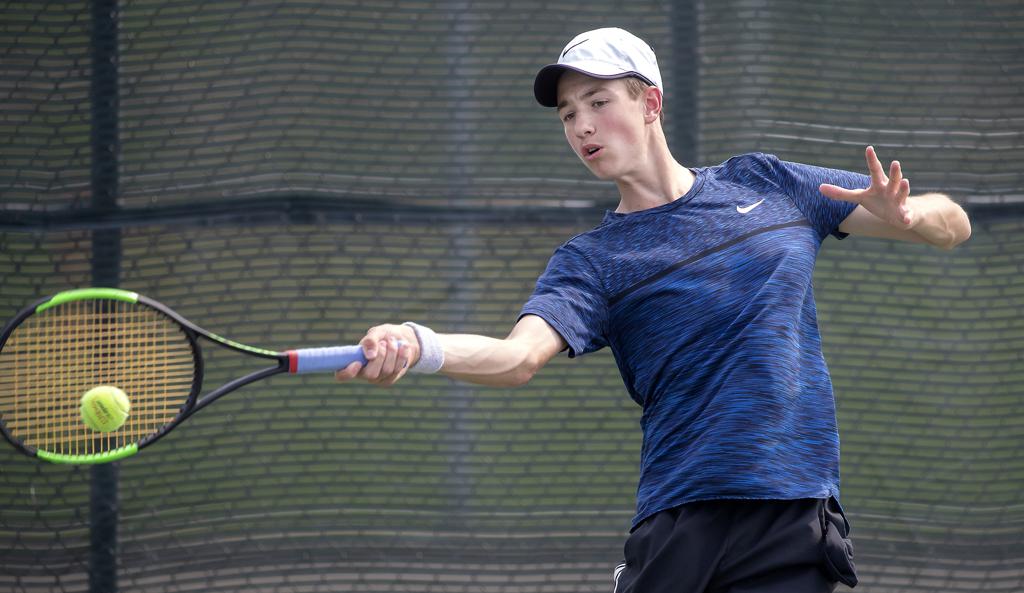 Eastview’s Gavin Young has a strong tennis pedigree. His dad is the University of Minnesota coach and his mom played for the Gophers.

Gavin Young knows he’s had the benefit of a few breaks in the lottery of his tennis life.

The now-lanky sophomore, who’s grown more than 5 inches in the past year, has an enviable tennis pedigree: His father, Geoff, is in his 13th season as the men’s’ tennis coach at the University of Minnesota. Dana, his mother, is a former Apple Valley High School star who played for the Gophers and coached tennis at Denver University.

The university’s Baseline Tennis Center was a second home to Young growing up, with college players and coaches always available to hit with or lean on. With that kind of background, he has emerged as the No. 1-ranked high school singles player in Minnesota.

In fact, it’s been largely expected.

“I know the expectations are there,” Young said. “But you can’t think about them because they get in your head.”

Yet it’s tough to find a note of arrogance in Young. He doesn’t elevate himself over his Eastview High School teammates. While tennis is admittedly his life, for a little more than three months in the spring Young is just another player on the roster.

“I’m playing for the team instead of individually,” said Young, who will lead the No. 3-seeded Lightning into Tuesday’s Class 2A quarterfinals. “If you lose, you have teammates around you to lift you up. And you do that for others, too. It’s important to always be looking out for other people.”

Young hasn’t abandoned individual goals. A loss in the second round of the singles tournament last year was enough to whet his appetite for a much stronger showing this year.

After the team competition Tuesday and Wednesday, he’ll go into Thursday’s individual matches as the No. 1 seed in the field. That’s largely the result of winning two of three matches against close friend Maxim Zagrebelny, an Eagan senior. Zagrebelny was the 2A singles runner-up last year and is seeded No. 2

Before Young allows himself to entertain thoughts of a possible rematch, he’s committed to helping the Lightning advance as far as possible in the team tournament.

Teammate Sourabh Terakanambi, who teamed with Nisal Liyange to win the Class 2A doubles championship a year ago, said Young has become a valued teammate.

“At practice hitting with him, it’s different from with anyone else in the state,” Terakanambi said. “He gives us almost a guaranteed point in every match. It’s awesome having him out there.”

Young admits that expectations are not all bad. He enjoys that the team counts on him for a victory whenever he steps on the court.

“It adds to the pressure, but I do like it. It makes me feel important,” he said with a laugh.