Logan Couillard, the No. 2-ranked player in Class 1A, honed his considerable tennis skills at a north Minneapolis city park court. He's looking to shake off last season's disappointing finish and reach next month's the state tournament. 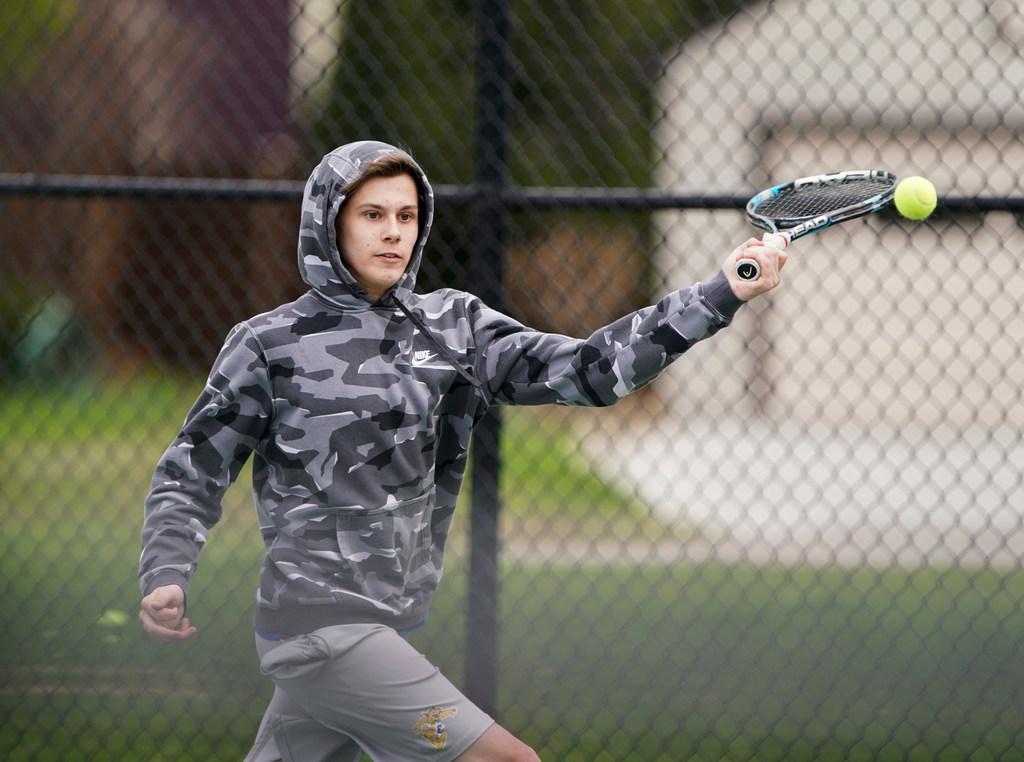 Minneapolis Edison tennis player Logan Couillard returned a shot while he played in a match against Minneapolis South on May 6 in Minneapolis. Photo: RENEE JONES SCHNEIDER • renee.jones@startribune.com

The Minneapolis Edison senior is the No. 2-ranked boys’ tennis player in Class 1A owing to amazing hands, a lefthanded serve and an innate feel for the game, a natural gift that few can boast.

But he swears he’s done it all despite missing the southpaw swing that had been his weapon of choice.

“My forehand went away,” Couillard said. “I don’t know what happened. I haven’t been able to get it back.”

Couillard’s loss is largely from his perspective. At one time, his forehand was his calling card and security blanket. It came naturally and he was able to hit it at all angles, with varying degrees of power, spin and pace. Couillard believes it went missing two years ago on a trip to New York to see the U.S. Open.

“I went, like, two weeks without playing and when I got back, I couldn’t hit it. I lost it,” he said.

His opponents might feel differently. Couillard is undefeated at singles this season and has helped raise the profile of tennis at Edison, a school without a shred of high school tennis history.

Ask his coach, Nancy Akpan, and she’ll say his forehand is still a pretty potent force.

“When he told me that, I said ‘Logan, that doesn’t make sense,’ ” Akpan recalled. “It’s still his weapon. He can control the ball, it’s dependable, he can do anything with it. He hasn’t lost it.”

What Couillard is missing, more likely, is the sense of ease with which the game has always come to him. His mother, Polly, played tennis in high school. After his father died when he was young, Polly was determined to keep her three sons — Mason, 24; Lief, 19, and Logan, 18 — active. Logan took to tennis like the game was created for him.

“I used to play with him just about every day when he was about 8,” Polly recalled. “He always had a lot of energy and was really competitive. It was a sport for him to latch onto.”

Their court of choice was not a private tennis club or a bank of courts at a local high school. The Couillards would meander just a few blocks north of their home to a lone, somewhat worn-out court at Loring Elementary School on 44th and Upton avenues in north Minneapolis.

There, Logan’s fondness for tennis solidified. At what was officially named Victory Park but known simply as Loring in the neighborhood, he developed different and dangerous ways to use that forehand. A little power here, a slice there, some topspin, a lob. It all became part of his repertoire.

“It came to me quick,” Couillard said. “For other kids, it takes a couple of years to start doing slicing and all that. It came to me when I was 10. I was pretty good at it.”

But simply playing on the nearby asphalt court wasn’t going to take him as far as he wanted to go. His mother and her father began shuttling him to clubs and lessons, with grandpa footing much of the cost. Couillard became well-known in the relatively small but tightly knit local youth tennis scene.

He flourished for a few years, knocking around the local USTA Junior ranks, developing his game. Then came his fateful trip to New York — one he’s taken often — followed by the MIA forehand.

The lowpoint came last season when he failed to get out of the section semifinals, despite being ranked highly in the state Class 1A polls and seeded No. 2 in Section 5. He was expected to play in the section finals against Mounds Park Academy’s Parker Law — then, as now, the No. 1-ranked player in the section and the state — and move on to the state tournament.

Instead, his season was over, his forehand having failed him. Tennis, a passion for so long, had become uninteresting. He stopped playing tournaments, stopped competing altogether.

“He just stopped,” Polly said “Maybe the pressure got to him. He lost a lot of confidence.”

That’s exactly what Akpan, herself a professional tennis coach, thought.

“He’s got the potential to go as far as he wants,’’ she said. “He could win state. He just has to overcome what’s in his head.’’

Since removing himself from the stresses of junior tennis, Couillard’s game has mostly returned to its previous level, thanks to spending his free time hitting with brother Mason at Loring School, the court he calls his favorite.

“Tournaments kind of make me nervous,” he said. “I just like playing for fun.”

He hasn’t eschewed all playoffs, however. He’s determined to rectify his disappointing postseason showing of a year ago. The Section 5 individual tournament starts this week.

“I want to make it to state,” he said. “And I want to get to the semifinals. After that, we’ll see.”